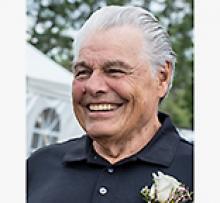 Peacefully on December 19, 2020, John McNab passed away at St. Boniface Hospital eight days shy of his 80th birthday.
He leaves to mourn his spouse of 39 years Marie Comte; his daughter Diane McNab; his granddaughters, Jennifer Langan of Calgary and Jesika McNab of Winnipeg; and his great-grandchildren, Taylor, Rayden, Brooklyn and Liam. He will also be remembered by his in-laws, Jean, André (Gisèle), Suzanne (Geof), Aubert, Céline (Hank), Clémence, Alain (Lorraine), Alice (Aimé), Fernand (Nicole) and Léo (Audrey) and numerous nieces, nephews, relatives and friends.
John is predeceased by his parents, John and Lucy (née Bruce); his daughters, Janice Langan and Joanne McNab; his grandson Justin Langan, his brother Bert (Linda), and by his in-laws, Michel, Barbara, Wayne and Simone.
John loved sports, especially his Montreal Canadiens. He never missed a travel opportunity to watch them play at the old Forum and the Centre Bell in Montreal, New York, Minneapolis and Québec City. He also had a passion for baseball and softball. John would often say, "There is no better way to spend a Sunday afternoon than watching ball." He loved going to Shaw Park or John Blumberg to watch his nieces, Corinne, Stéphanie and Mia play for Smitty's Terminators, and later travelled with family to Arizona, Nevada, Texas and Colorado to cheer on their US college softball games.
During winter, John enjoyed travelling with Marie to seek warmer climates to Jamaica, Dominican Republic but mostly to Mexico from Cabo San Lucas to Mazatlán, to Chichen Itza and Cancun. During summer, they took numerous train trips to Vancouver, Prince Rupert, Quebec and Nova Scotia, a perfect locale for meeting interesting people and sharing life stories.
Wherever John travelled (cruise to Alaska, tour of Great Britain, Spain and Portugal), people were drawn to his warm personality and he always had a big smile. He connected easily with co-travellers from all over. The highlight of the Great Britain trip was a visit to his father's gravesite in the Brookwood Military Cemetery in Surrey where he was laid to rest in 1944 during the Second World War.
John had many interests. He loved reading books of fiction but was most passionate about fishing whether on the Red River, in the Whiteshell, our many northern lakes, Alaska or Mexico where he had the thrill of landing a blue marlin. It was a happy day when he moved up from the "stand-by" list to the "A" list for the yearly fly-in fishing trips in northern Manitoba with his in-laws.
John made a lot of friends over his lifetime, but none more so than his special group whom he's known for 31 years. Their honesty, open-mindedness and kindness always reminding him to keep his feet planted firmly on the ground. This allowed him to live the kind of life he always wanted, "One Day at a Time".
A private funeral service will be held on Sunday, December 27, 2020 at 2:00 p.m. at Adam's Funeral Home with a Celebration of Life held at a later date.
The service will be available to be viewed via Live Streaming. If you would like your name to appear in the guestbook, please email your name to office@afh.ca.
In lieu of flowers, memorial donations can be made to Siloam Mission, 300 Princess St., Winnipeg, MB R3B 1M3.