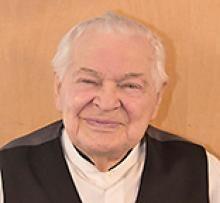 On Tuesday, December 22, 2020 at Victoria General Hospital in Winnipeg, at the age of 90.
He is survived by his children: Mike, his children, Crystal (Jeff) Grela, and grandsons, Silas and Jeremy, Joel and granddaughter Sophie; Marcia (Bruce) Tait, their children Charles (Karen Almasi-Tait), and Andrew (Jenny), and grandchildren, Tiberius and Yvette; Theresa (James Lavoie), and their children Annick, Julien, and Emi; Denis (Jo-Anne), and their children, Patrick (Melissa Greavette), and Chantal (Anthony Beach); Sylvia (Lisa Rapley); and Barbara's children, Katrine (Kyle) Harris, and her grandchildren, Kaliyah and Kai, and Nicholas Fisette (Amanda Boyd). Also survived by his sister Aurore Sanche, brother Arthur Marion (who died December 29, 2020), sister-in-law Sylvia (Kasun) Godbout, brother-in-law Maurice Kasun, and numerous nieces and nephews.
Fernand is predeceased by his wife Jeanne Barbara (Kasun) in 2011, daughter Barbara Fisette (1990), daughter-in-law Margaret (Williams), brother-in-law Leo Kasun (2011), and sisters, Florence and Lucille (2019).
He was born in Marcelin, Saskatchewan. After graduating high school he attended St. Joseph's College in Edmonton. After graduating with a bachelor degree, he moved to Winnipeg where he met Jeanne Kasun, and they were married in Leask, Saskatchewan on August 2, 1955. He worked for the city of St. Boniface until 1972, then for the City of Winnipeg, where he became the chief archivist, retiring in 1990. He started a small engine repair business after retirement, and continued doing this until moving to the Parkway with Jeanne in December 2007.
A Funeral Mass will be held Tuesday, January 5, 2020 at 10:00 a.m., at St Vital Parish Church. Due to COVID-19 restrictions, only immediate family will be allowed to attend. The service will be live streamed https://www.youtube.com/channel/UC0552B_3KYY-tak0yvIw8og.
In lieu of flowers, donations may be made to Diabetes Canada, Heart and Stroke Foundation, or a charity of your choice.

Family and friends may sign a
book of condolence online at www.desjardinsfuneralchapel.ca.