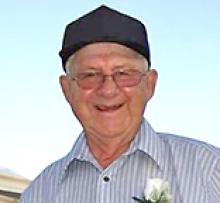 The family of John Morowski is saddened to announce his passing on December 22, 2020, in Winnipeg, Manitoba. With his children by his side, John peacefully left this Earth to be with our Heavenly Father.
John was a greatly beloved and caring husband, father, brother, uncle, grandpa, great-grandpa, and friend. John will be deeply mourned and dearly missed by all who knew him. John was predeceased by his parents, Fred and Nellie Yurkiw, two brothers-in-law (Harold and Rae), two sisters-in-law (Carmen and Melody), and mother-in-law (Anne). Deeply feeling his loss are his wife Betty Elizabeth Morowski of Selkirk, Manitoba, his four children, Donna (John) Solleveld, Cindy (Paul) Flynn, Rosanne (Jarrod) Plett, and Steven (Marla) Morowski, and three stepchildren, Kerry Sumka, Darrell Sumka, and Michelle Sumka. John also leaves to mourn his brother Robert and his four sisters, Olga (Kit), Ethel (d. Harold), Anne (Orlando), and Jean (d. Rae). His special friends, Nan Morowski, Cecile McMurray, Roland Fillion, 17 grandchildren, four great-grandchildren and many nieces and nephews.
John was born in Weiden, Manitoba. John spent most of his young working life in construction up north on the dams, and later in years until his retirement from Orloff Scrap Metal. In 1963, he met Nan Gudgeon and they were married from 1964 to 1992, they had four children. In 2001, John remarried Betty Sumka. When he finally retired, John and Betty moved to Selkirk, Manitoba where they remained until John's death.
In John's past time he enjoyed going fishing especially with his sons-in-law, stripping copper for hours on end, and listening to the Portage Polka Station. He also loved to go dancing especially at the Legion, and his most favourite thing to do was to play Canasta with his special friends and family. His favorite saying was "where's the coffee?" and "who's playing cards?". John would do anything to help anyone in need; he was a patient, kind, and caring friend and family man.
John you will be greatly missed by all who loved you.
Keep on shuffling until we can play again.