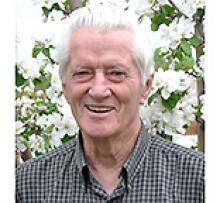 Our dear husband and father passed away on January 12, 2021, at the De Salaberry District Health Centre in St. Pierre, at the age of 92.
He had spent nine months at the Bethesda Hospital and almost ten months at the hospital in St. Pierre, while waiting for a care home bed.
He had a happy childhood and as a teenager joined the threshing gangs out west. Back in Twin Creek, while hoeing beets, he met the love of his life, Tina Peters (who had recently moved from Saskatchewan). Five months before their wedding, Dad's father passed away very unexpectedly and Dad went home to help on the parents' farm until their wedding.
Dad and Mom were married on July 18, 1953, and after a short honeymoon at Clear Lake, they farmed near New Bothwell from 1953 to 1965. In 1965, they moved to Twin Creek, when God gave them the opportunity to purchase and operate a turkey farm. This later turned into a chicken, turkey and grain farm.
Dad had a real passion for farming but his greatest joy was his family. He enjoyed traveling, playing games or just visiting with them. He had many collections and a variety of interests. Some of his collections and interests included: stamps, coins, license plates, hockey/football cards, antiques, gospel music and instruments, photography, travelling, and Mennonite history.
He was also a great inventor. One of his inventions was a large train track on a platform that he connected to a garage door opener that could be winched up out of the way and down again when the grandchildren wanted to see it.
Dad loved life and learning and was a great teacher. He once told us that he would have enjoyed being a school teacher, but his help was needed on his parents' farm. He was our storehouse of knowledge. If we needed to know something, he would very often have the answer. This included computer-related questions which he could answer well into his senior years. When he didn't know the answer he would send us to a dictionary or a set of encyclopedias.
He had a great faith in his Heavenly Father and lived his life with that perspective. He had a heart for missions at home and abroad. He was always willing to help others or lend out farm equipment to those who needed it. Some of his services in the church included being a S.S. teacher and leader at Prairie Grove Chapel. Later at Blumenort Church he helped with Bible camp, was a S.S. Superintendent, a deacon, and served on several church boards including MCC and the Food Grains Bank. Being a deacon couple gave Mom and Dad many opportunities to serve others.
In 1998, they moved from their farm at Twin Creek to a house in Steinbach; enjoying semi-retirement while their son Lorne looked after the farm. Dad still loved to make regular trips to the farm and enjoyed helping with some combining well into his mid-eighties. In 2011, they moved to Bridgepark Manor which Mom and Dad were able to enjoy together for 8 years.
His last 19 months were spent in the hospital waiting for a care home bed. When Covid restrictions hit, he was often only allowed one or two visitors, and some months only allowed window visits. He was wonderfully cared for by Dr. Kaethler, and the staff and nurses at Bethesda Hospital and St. Pierre Hospital. The family would like to extend very special thanks for the wonderful care and genuine interest they took in him. Our family was so proud of him when we often heard from the nurses of how polite and thankful he was.
He is lovingly remembered by his wife Tina, married 67 years; children: Eleanor (Larry), Elaine (Stephen), Kathleen (Ike), Wanda (Sieg), and Lorne (Lu); grandchildren: Alicia (Wendall), their children, Corina, Abigail; Michelle (Thor), their children, Natalie, Erica, Lucas; Charlene; Kevin (Denise), their children, Scott, Joel, Alexa, Brennan; Darryl (Terrilee), their children, Tyrsa, Mila, Caedmon, Declan; Donna (Andy), their children, Brooklyn, Breydan; Stephanie (Luke); Melina (Franco), their child, Adelina; Amy (Russ), their children, Jude, Kenya, Selah; Jennifer (Jordan), their children, Noah, Olivia; Heather (Ryan), their children, Isaiah, Bella, Jonas, Dallas, Emerson; Jordan (Gillian); Andrew (Janie); Janina; Emily; Tyler; Karalee. He is survived by one sister Martha Reimer, two sisters-in-law, Virginia Peters, and Susan Stoesz, and two brothers-in-law, Henry Peters, and David Peters. He was predeceased by his parents, Aron and Margaretha, four brothers, and four sisters, and one son-in-law (Rey Friesen).
While it is very hard to imagine our lives without our Dad, our tears are filled with much hope, a glorious hope of a grand reunion, all because of Jesus! We will miss him much, but are so grateful for all the wonderful memories.
The funeral service was held on Tuesday, January 19, 2021, at 2:00 p.m. at Birchwood Funeral Chapel, Steinbach, MB, followed by a private family interment. To view the service via livestream please visit the following link.