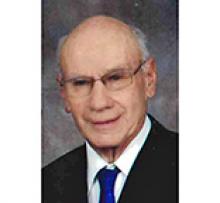 With heavy hearts, we announce the passing of Grant McRae on January 15, 2021 at the age of 87.
Dedicated husband of Marie McRae (nee McLennan) for nearly 63 years, loving father of Heather Duthie (John Duthie) of Calgary, Garnet McRae (Elisa Romano) of Ottawa, and Vivian McRae-Dawson (Randy Dawson) of Portage La Prairie, cherished grandfather of Sofia McRae and Joseph McRae of Ottawa, and Kody McRae, Carro Haight, and Brady Haight of Portage la Prairie, brother-in-law to Fred Amann, Weldon Fehr, Don and Gail McLennan, uncle to many nieces and nephews, and best friend to Pebbles.
Grant was predeceased by his father John McRae, mother Wilhemina (Minnie) McRae (nee Deas), sister Loreen Amann, brother John McRae; sisters-in-law, Jean McRae and Shirley-Ann Fehr; and half brothers and sisters, Jean (Jennie), Clarence, Letitia (Leta), Margaret and Melvin.
Many thanks to the staff of Gladstone Home Care and Portage District General Hospital for their time and care and to Vivian, Randy, Kody, and Carro who provided love, support, companionship, a home, and ongoing care in Dad's final years and months.
Grant was born and raised on the McRae family farm near Katrime, MB and completed his mechanics training before spending time as a mechanic in Fort McMurray, AB. He returned to Manitoba where he met and married Marie McLennan in 1958. Together, they settled into life in Gladstone to work and raise a family of three children. Over the years, Grant worked at Gladstone Garage and was the proprietor of Grant's Repair, and later the Texaco Service station in Gladstone. Near the end of his career, he obtained his refrigeration and air conditioning certification, working many years in this field, while also acting as the caretaker of Legion Place apartments. Grant was also a dedicated caregiver for his wife, Marie, for many years in her on-going struggle with dementia.
Grant was respected and involved in the community, having served as a longtime member of the Gladstone Volunteer Fire Department, as coach of many minor league baseball and hockey teams over the years and as a 4-H instructor of woodworking and mechanics. He enjoyed playing Oldtimers hockey and curling in Gladstone, playing pool with friends at the local Legion, and participating in a bowling league in Neepawa. He was a fan of the Winnipeg Jets and Winnipeg Blue Bombers, watching many games on TV. Closer to home, he closely followed the Gladstone Lakers hockey team, taking in as many games as possible and also enjoyed watching baseball during the annual fall Agricultural Fairs. Grant was well-known in Gladstone and could often be seen having coffee at the bakeshop or around town in his truck with his dog Pebbles. He will be missed in the community he called home for so many years.
If desired, in memoriam donations to PAWS (PawsCanada.org) would be appreciated.
Due to the current Covid restrictions, cremation will take place and a memorial service with interment of the ashes will be held at a later date.

On-line condolences may be shared
on Grant's obituary page at
www.ClarkesFuneralhome.com.