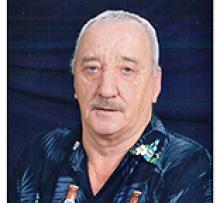 It is with so very heavy hearts we announce Doug's passing on Monday, January 25, 2021, at St. Pierre Hospital, St. Pierre, MB.
He leaves to mourn his wife Rosemary, of 51 years; son Grant (friend Amanda) and his three sons: Brityn, Gage and Bobby; daughter Teressa Beaudoin (Darcy); daughter Allissa (Trevor) and their children Dixie and Lucy; son Dean (Des) and their children, Eli, Owen, Emerson, and Shilo; son Noah; sister Diana Breckon, brother Ron (Maxine) and his daughter Lisa and family; brother Wally (Marlyn) and their children Shannon and Derek and families; brother Kelvin; father-in-law Jack Rettaler; brother-in-law Larry and children; sisters, Patsy and Shirley and their families.
He was predeceased by his parents Kelvin and Lillian; sister Joann; brothers, Jim and Rick; mother-in-law Linda Rettaler; brother-in-law Clyde Gregoire.
Doug will be missed by many other family and friends.
He loved coaching baseball and hockey, quadding, fishing, gardening, camping and golfing in Lancaster and trips to Texas.
A longer obituary will be posted at a later date.
A memorial to celebrate Doug's life will be held at a later date.
Donations in memory of Doug may be made to Southern Health – Sante Sud – in memo line, please designate CancerCare Steinbach.