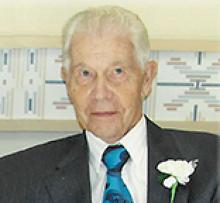 Miroslaw passed away peacefully at Seven Oaks Hospital, at the age of 99 years.
He was predeceased by his wife Maria. He is survived by his son Roman (Leslie), and nieces and nephews in Winnipeg, Ukraine and France.
Miroslaw was born in Terebovlia, Ukraine. With the chaos and turmoil of the Second World War he made a decision that he would make a new start in Canada. His journey was lengthy and difficult, but eventually he immigrated to Canada in 1948 and lived with his sister and her family in Winnipeg. At that time, he was offered the opportunity, by his brother-in-law, to begin a career in the printing industry, which he enjoyed and was employed for 40 years.
Soon after beginning his employment he met his beloved wife Maria at a picnic and dance and were happily married for 57 years until her passing in 2009.
When not at work, he had a love of gardening and took pride in making his yard the envy of the neighbourhood.
During his retirement, Dad had the opportunity to travel to the Ukraine and France to visit family.
We would like to thank the doctors, nurses and aides of the 4th floor, unit 6 at the Seven Oaks Hospital for their compassionate care.
Due to current covid restrictions a private service has already taken place.