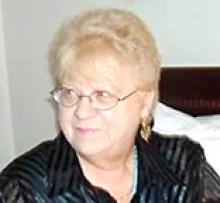 After a brave fight with Dementia at the age of 82, Nola passed away on Wednesday, March 3, 2021, at the Victoria Hospital in Winnipeg, Manitoba.
Beloved daughter of the late Martin and Mildred Thompson (Piney, Manitoba), beloved wife of Peter Camplin, devoted and loving mother of Michele Gurman and husband Ken of Vita, Manitoba and Lisa Lammens and husband Duane of Chatham, Ontario. Grandmother of Kendra Gurman, Dylan Gurman and Ryan Vinet (Courtney). Nola is also survived by her sister Karen Thompson-Caulley, brothers, Wayne (Hannah), Don, and sister-in-law Margaret Thompson.
Nola also leaves many cousins, nieces and nephews.
She was predeceased by her brother Doug Thompson, brother-in-law Darrel Caulley, sisters-in-law, Margaret (Don) Thompson and Audrey Thompson, great-granddaughter Lexi Bernice Vinet, niece Janet Smook, nephew Blair Thompson, and father of Michele and Lisa, Jerry Vinet (2011).
Nola's working career was with Canada Post in Piney, Swan River and Winnipeg, Manitoba. She had many friends that will miss her deeply. Such a wonderful and genuine person, we will all miss her immensely. Nola's greatest joys in life were her daughters and her grandchildren.
Due to Covid related restrictions, a Celebration of Life will be held at a later date.
Burial of cremated remains will be in Wampum Cemetery, Wampum, Manitoba.