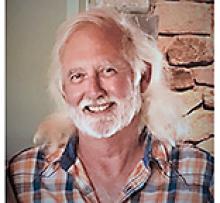 René Marcel Desharnais, son of Armand and Claire (Dupuis), passed away suddenly on Monday, March 15, 2021 in Winnipeg, MB, at the age of 70.
He is survived by his mother Claire; his partner Maxine Fehr, as well as his ex-wife Lyse Hébert; and their three children: Sol (Abdul Nassoro), Janette (David Niblett) and Guy (Lucy Potter). He also leaves behind two granddaughters: Alice and Estelle Desharnais; as well as four stepchildren: Isabel Hiebert (Dale), Hans (Kirsten Van Der Linde), Aiden (Karissa Posthumus) and Sophia. René is also survived by his six siblings: Léonard (Ann-Marie), Lise, Marc (Ginette), Pierre, Gisèle Balcaen, Lucie (Richard Gagnon), as well numerous members of his extended family and dear friends. He is predeceased by his father Armand, and brother-in-law Gilbert Balcaen.
René was born on November 24, 1950 and grew up in Carey, west of St. Pierre-Jolys. René left his farming roots behind in 1985 to work as a contractor in St. Pierre. René was also very involved in his community. He volunteered countless hours to the Caisse Populaire, the Red River School Division, the Institut Collégial de St. Pierre parents' committee, the Comité culturel de St. Pierre, and many other groups. He followed closely in his father's footsteps by getting very involved with the St. Pierre Museum as well as the Cabane à sucre at the Festival du Voyageur and in St. Pierre-Jolys.
Six years ago, he met Maxine Fehr with whom he lived, with her daughter Sophia -who he loved dearly as his own daughter. René had a great joie de vivre, a big heart, and an immeasurable generosity. A man of strength with a certain tenderness, he was well loved by the people in his community and his loved ones. We could readily find him on horseback, on his motorcycle, in the garden or in his barn, working on something or other.
An intimate ceremony by invitation only (due to COVID restrictions) will be held soon. We hope to invite you to a celebration of his life later this summer if conditions allow. Details to come.
If you so wish, we invite you to donate to a cause that was very dear to his heart, the: