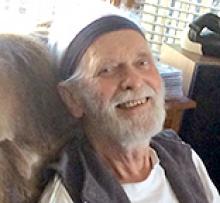 We are announcing the passing away of our beloved father Philip Isaac Dickman on March 19, 2021 at the age of 91. He passed away quietly at Concordia Hospital in Winnipeg, Manitoba after a series of unfortunate events.
Phil was born on October 14, 1929 to Aaron and Gladys (Murray) Dickman in Toronto (North York). He was a lifelong athlete and outdoor enthusiast, who excelled in track and football in high school. Our father briefly attended Bible College and then met our mother, Irene Koop, when they were both working at a boys group home near Ailsa Craig in southern Ontario. After marrying in 1957, they moved to Winnipeg where Phil continued his studies, graduating with a master's degree in social work from the University of Manitoba. Phil and Irene went on to have three children, all born in Winnipeg.
After graduating, Phil worked in social service in Portage la Prairie and Winnipeg, Manitoba. He sought a transfer to Churchill, Manitoba to, as he put it, get out from behind a desk. This posting became his career touchstone, where he developed and honed his passionate commitment to social justice. Working in collaboration with the Sayisi Dene of Tadoule Lake in northern Manitoba, with whom he made many long-lasting friendships, was his most satisfying work experience. He went on to work throughout western Canada, moving back to Winnipeg, on to Fort Simpson, Northwest Territories and, finally, to Keewatin, Ontario, where he lived for more than 30 years. Phil was able to satisfy his lifelong dream of owning and working his own land when he and Irene bought their property in Pellatt, just northwest of Keewatin, Ontario. He and Irene built a home and lived on this property for close to 25 years. They sold this property and moved back to Winnipeg a few months before Irene passed away in September 2008.
Our father was a passionate outdoor gardener and a nature enthusiast. He spent most of his retirement travelling with Irene, gardening, planting trees and engaging with different charitable associations. He was a stalwart proponent of the New Democratic Party (NDP), a daily reader of The Globe and Mail, a proud supporter of the Canadian Centre for Policy Alternatives (CCPA). He read voraciously on a wide variety of topics, both fiction and non-fiction, and participated often in book-club meetings. He found community in the St. Andrew's United Church in Keewatin and, later through the St. Mary's Road United Church in Winnipeg. In getting older, Phil was always looking for hugs and kisses from everyone, especially his grandchildren.
Phil was predeceased by his wife (Irene Koop), and his brothers and sisters, Barbara, Anita, Ora, Owen and Jack. He is survived by his daughter Sandra (Angus Carr); his sons, Douglas and Michael (Brigitte Boucher); and his seven grandchildren, Aidan, Griffin and Ainsley Carr; Matthew, Sarah, Jordan and Nathan Dickman. Phil also leaves behind nieces and nephews with whom he maintained lifelong connections, and numerous friends from Winnipeg, Tadoule Lake, Kenora and across Canada.
Our thanks to the wonderful team of doctors and nurses at Concordia Hospital.
No service will be held at this time and the family request no donations be sent.