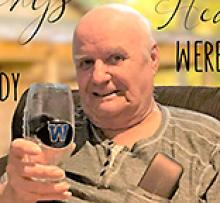 Blaine Harvey Suppes, 75, passed away on March 8, 2021, at Neepawa Health Care Centre in Neepawa, MB. He was born on June 4, 1945 in Minnedosa, MB to Jacob and Margaret (Gaetz) Suppes.
Blaine grew up in Basswood, MB and then Carmen, MB. After high school he moved to Calgary, AB and worked for a Chrysler dealership. In 1976 Blaine moved to Plumas, MB where he began farming and started working at Simplot in Plumas. Blaine moved to Brandon, MB in 1989 and continued working for Simplot in Brandon. He retired to Tenby, MB where he kept a meticulous yard and garden. Then off to Kinsmen Kourts in Neepawa in 2016.
Blaine married Louise Douville in 1968 in Calgary, AB, and they were married for 15 years. Blaine was very down to earth and always had a joke ready. He made many friends while at Simplot, the irrigation crew has many great stories, one being that he would eat his toast dry before he would ever eat it with anything other than "Parkay" margarine. Blaine also made many fond memories camping and curling with the Plumas crew.
Blaine was preceded in death by his parents, Jacob and Margaret, and his brother Grant.
Blaine is survived by his former spouse Louise of Winnipeg, MB; his son Kevin (Jenifer) Suppes of Shilo, MB; his daughter Connie (Clint) Anderson of Gladstone, MB; his grandchildren, Joshua Loades, Julie (James) Suppes, MacKenzie Lynn and Kyle Anderson; his great-grandson Milo; his cousins, nieces, nephews, other relatives and many friends.
A graveside memorial service will be held at Emerson Cemetery in Emerson, MB at a later date due to COVID-19 restrictions. The family will be greeting friends and relatives after the service.
In lieu of flowers, the family requests memorial donations be made to Neepawa Health Care Centre in Neepawa, MB or to a charity of your choice.

Condolences & memories may be left on Clarke's Funeral Home's tribute wall at www.clarkesfuneralhome.com/obituary/Blaine-Suppes