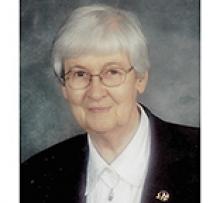 Sara Loeppky was born on May 3, 1931, to Gerhard and Sara Loeppky, one of a family of eight girls.
Sara has four surviving sisters and three deceased sisters. Sara was raised on a farm in New Bothwell. She accepted Jesus Christ as her personal Saviour and Lord and was baptized at the age of sixteen. In 1953, she graduated from an LPN nursing course and worked at Steinbach Bethesda Hospital. In 1955, she attended Steinbach Bible Institute for two years. She taught Sunday School and Daily Vacation Bible School and led a Youth Ministry in the Niverville Chortizer Church. Later she accepted a call from God to become involved in the EMC board of Missions for Medical Work in Chaco, Paraguay. Four years later she went to Thicket Portage to permit teach grades one and two in preparation for work back in Paraguay. She had to learn to speak the Guarani language and then taught school for thirteen years. She continued to trust God to direct her paths. Proverbs 3:5, 6.
She became involved in church planting in Caaguazu, Paraguay and later worked in the Christian Book Store.
In 1995, she retired from her work in Paraguay and became involved in her home church, EMC, where she ministered in the Sunday School, Mission Sisters and as a Deaconess to the Seniors.
Her next years were spent at Woodhaven Manor where she hosted a Ladies Bible Study.
Her last weeks were in Bethesda Hospital from where she went to her heavenly home on March 29, 2021.
The private family livestreamed funeral service will be held on Thursday, April 8, 2021 at 11:00 a.m. at Birchwood Funeral Chapel, Steinbach, MB. To join the family via livestream please click the link posted below her obituary on Birchwood's website.
If friends so desire donations in memory of Sara may be made to the EMC Missions in Paraguay.