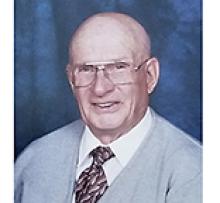 Peacefully at the Riverview Health Centre on Sunday, May 9, 2021, Mr. Beverley (Bev) Towns passed away at the age of 95 years.
He leaves to cherish his memory his children, Cheryl Robinson, Pamela Gillert and Robert Towns; daughter-in-law Debra Towns; his grandchildren, Corrinne, O'Jay (Alison), Quentin (Seema) Robinson, Joseph, Carolyn Pearson, Jacob (Brandie), Luke (Amanda), Charity and Dawn (Matt); his great-grandchildren, Avery, Grace, Anoushka, Theodore, Hailie, Colton, Morgan, Malia, Carter and Ariel; Helen's daughters, Marlene (Bob) Walker, Lila (Murray) Lovie, and their children and grandchildren. He also leaves to mourn his passing numerous nieces, nephews, relatives and friends.
He was predeceased by his first wife Ruth Towns (née Standring), his second wife Helen Towns (née Delf), his son Christopher Towns, his parents, Reuben and Edna Towns, his brothers, Orville (Doris, Bessie), George (Edythe, Freda, Jo), Francis (Pearl), Vincent (Charlotte) Towns, and his sister Marno (Al) Culchesky.
Bev was born at Holmfield, Manitoba on January 18, 1926 and received his schooling at Enterprise School. He loved to tell stories about his time as a fireman for the railroad and shoveling coal to keep the train running. He worked a variety of jobs until he bought a farm near Ninette after marrying Ruth Standring in 1951. In 1971 they bought the Rathwell Solo store and became storekeepers and Postmasters in Rathwell. Ruth passed away in 1974 and the following year he married Helen Spencer of Rathwell. They continued running the store and post office until their retirement in 1986. They built a house in Rathwell and became very active volunteering in the community. They enjoyed travelling to other countries for several years and later purchased a winter home in Mesa, Arizona where they made many friends and enjoyed the activities with friends and relatives. Bev enjoyed gardening, square dancing, cards, music, golfing, and especially visiting with friends and family. In 2011 Bev and Helen moved to Oak West Estates in Morden and enjoyed making friends in their new community. In 2014 Helen passed away and Bev moved into Homestead South in Morden. The following year he moved to River Ridge Assisted Living in Winnipeg to be closer to his daughters and in 2019 he moved to Riverview Health Centre.
We would like to thank the staff at Homestead South, River Ridge Retirement Centre, and Riverview Health Centre for their kindness and the care they took of Beverley while he was there.
A Virtual funeral service will take place at Woodlands Cemetery in Rathwell, Manitoba on Saturday, May 22, 2021 at 2:00 p.m.
The service will be available via Live Streaming. If you would like your name to appear in the guest book, please email your name to office@afh.ca
In lieu of flowers, memorial donations can be made to the Canadian Cancer Society.