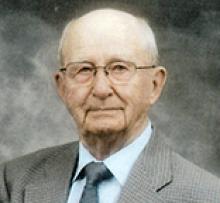 Dad was born on October 8, 1921, in Bergfeld, MB.
He was predeceased by his parents, Jacob and Katherine (Funk) Harder, wife Mary (Maria Schalla), son-in-law John Schmidtz and daughter-in-law Helen (Bergen) Harder.
At the age of seven he moved with his family to South America. After two years of a hard life they returned to Canada, arriving in Winnipeg on New Year's Eve. Dad could still picture the CN Train Station all lit up in Christmas lights. He always spoke of returning to South America for a visit.
In 2004, at the age of 82, Dad booked a 10-day tour. He enjoyed the trip immensely. Having his niece Mary Bestvater on the trip as well, made it all the more special.
Dad was a social person and was thankful for the friendships he formed during his eighteen years living at Fernwood Place. Especially his good friends Anne Loewen, and Ray and Flora for their help, Richard Smith for his prayers and support and all the caregivers at Bethesda Regional Health Centre and Bethesda Place.
Dad rarely missed an exercise class at Fernwood. He was always encouraging others to join. He'd say if you don't exercise you will rust up.
Dad had a "sweet tooth". He made the best rhubarb jam and apple pie! He enjoyed all the "sweet treats" from family and friends. He'd say, "there's nothing wrong with eating dessert first."
Dad was thankful that he was able to drive well into his nineties. This gave him independence. He enjoyed visiting family and friends or just going for a drive.
Left to mourn him are: Fred (Cheryl) Harder, Emily (J.P.) Poitras, Audrey (Bob) Currey, Reg (Carol) Harder; two sisters Tina Hiebert, Mary (Ed) Hiebert, one brother Henry (Evelyn) Harder; five grandchildren: Lisa (Kevin), Loreli (Tony), Dennis, Fred Jr., Christian; six great-grandchildren: David, Sera, Carina, Courtney, Carlyn and Carson.
Dad has now been reunited with loved ones and rests in God's care.
We love you Dad...until we meet again.
A private family graveside service will be held.