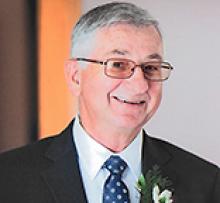 It is with heavy hearts and profound sadness that we announce the sudden and unexpected passing of our dear husband, father, brother, uncle and Gigi; John Lysak, 77 years, at Health Sciences Centre, Winnipeg, MB, on June 16, 2021.
John left this world peacefully with his devoted family by his side.
He is predeceased by his loving mother Justyna and father Daniel of Ternopil, Ukraine as well as brothers, Walter, Michael and brothers- in-law, Peter, Ron and Michael.
Left to cherish his memory are; his wife of 54 years, Diane (Penrose), his son James, his daughters; Melissa (Ermanno), and Heather (Travis), loving grandson Hunter, and new grandpuppies, Baggio and Tikka.
John also leaves behind his beloved siblings; brothers Orest (Donna), and Morris (Edna), sisters, Pauline, Ann, Sonya and Emily. He will be sadly missed and lovingly remembered by his many nieces, nephews and extended family.
John was born on May 5, 1944, on the farm, one of nine children in Hazel Dell, Saskatchewan. He was a mischievous and happy child who was much loved by all his siblings and was known in the family as the peacemaker. He always wanted everyone to get along and play together and was known to be an athletic child. He went to school in Lone Spruce, Saskatchewan and then on to Sturgess Composite High School. He stayed to work on the farm with his family for many years and later in life, he took loving care of his mother into her golden years spending countless hours helping take care of her home and garden.
In 1963, John moved to Winnipeg after following his older brothers, Walter, Michael and Orest, where he later met his wife Diane on a blind date arranged by each of their best friends. They fell in love and later married on June 17, 1967. Together, John and Diane worked hard and raised three children in Southdale and Island Lakes.
John spoke fluent Ukrainian and was a member of St. Josaphat Ukrainian Catholic Church, and later settled with Diane at St. Bernadette Parish where they attended regularly with their children. John's strong and devout faith in God has helped him to persevere through life challenges and was a huge source of comfort for him at difficult times in his life. He has passed this faith and devotion to God onto his children and grandson who were also raised in the Catholic Community and still practice today. His love and respect of nature and his compassion towards animals has been a source of peace and solitude for him throughout his life and is another gift he passed onto his children and grandson.
John began his working career in 1963 doing what he loved by working his way up in the agriculture industry. He was very proud that his work life had spanned 50 years and he only took one half sick day. He began with IH International Harvester in the parts department and worked his way through night school earning himself a degree in CITT Logistics, where he graduated from the University of Toronto. He moved onto Arnold Brothers and then settled for over 30 years with Versatile, then Ford New Holland. He retired his lengthy career as an Agricultural Logistics Manager with Ryder International and was not only a well-respected member of this prestigious community, but a well-liked and highly sought after confidante and friend to many he worked with. He was an intelligent man with a quiet and gentle soul who always put others first.
John loved fishing, hunting, and nature and was committed to his favourite charity Ducks Unlimited, where he volunteered for over twenty years and was involved in many fundraising and charitable functions.
John and Diane built their family cottage at Lester Beach beginning in 1975, and with his own hands and the assistance of brothers and friends they erected the main structure and later attached veranda. This has become a family retreat and favourite meeting place where family and neighbours have gathered throughout the years to celebrate many milestones. Recently, John was finishing an oversized detached garage on the property, which had been a dream of his to complete for many years.
John loved to golf in his spare time, tend to his garden and lake property, and was an avid pool player. He enjoyed time with family, friends and neighbours both at the lake and in their previous Arizona Property in San Tan Valley. In 1992, John surprised Diane with a 25th wedding anniversary trip to Phoenix, which culminated in their joint love of Arizona. They spent decades with their dear friends Gerry and Jackie and Tim and Diana soaking up the sun and relishing moments in the dessert. He was a pillar of strength to his family and always a kind and helping hand to neighbours, friends, siblings, nieces and nephews whenever called upon. He loved his family immensely and devoted his time, energy and compassion to their overall wellbeing.
A viewing will be held at Glenlawn Funeral Home and Cemetery at 455 Lagimodiere Blvd. on June 22, 2021.
A funeral service will be held at St. Bernadette's Parish located at 820 Cottonwood Road on Wednesday, June 23, 2021, at 11:00 a.m. The burial will follow at 12:30 p.m. at Glen Lawn Funeral Home and Cemetery at 455 Lagimodiere Blvd.
A special Thank You to all the amazing doctors, nurses, and healthcare staff at Victoria General Hospital, St. Boniface Hospital and Health Sciences Centre who worked tirelessly to provide the best care and compassion for our husband and father. Thank you to our neighbours and friends who have helped to ease our burden near and far.
If friends so desire, in lieu of flowers donations can be made in John's name to CancerCare Manitoba, the Canadian Mental Health Association or Siloam Mission.

Family and friends may sign a book of condolence at www.glenlawn.ca.