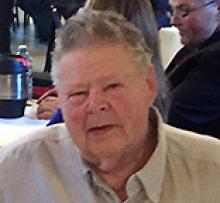 It is with profound sadness that we announce the passing of Melvine France Bjorklund on June 16, 2021 at the Lake of the Woods District Hospital in Kenora.
He leaves to mourn his beloved wife Joyce (nee Foley) of 55 years; his children, Jo-Anne, Deborah (Trent Fettig), Bonnie (George Bruce), Shaun (Shelly Pizzey); his grandchildren, Stuart (Elizabeth), Jocelyn (Eathan), Kaitlyn, Ethan, Jesse, Meadow and Elijah; his brother Clifford (Viviane); sisters, Esther Zenert, Lorna Brown Mattila (Doug), sister-in-law Grace and brother-in-law Albert Grandbois, as well as many foster children, nieces, nephews, cousins and friends. Melvine was predeceased by his mother Elisabeth Bjorklund Smith (nee Caux), father Birger, stepfather William Smith; brothers, Ivan and Richard; sister Ruth Siddle; sisters-in-law, Edith, Patricia Grandbois, Marion Waugh; brothers-in-law, Lorne Zenert, William Brown and Tom Siddle.
Melvine was born in Scotts Hill near Whitemouth, Manitoba on October 18, 1938 and lived in Whitemouth, Bissett and Winnipeg during his childhood. Melvine was a hard worker and his first official job was at an animal hospital in Winnipeg at the age of 14. Although Melvine did a variety of jobs, he was ultimately an entrepreneur and at first rented a garage, then opened his own business the Esso garage and restaurant in Seven Sisters Falls in 1965, which was sold in 1984. Melvine's second successful business was Shaun Dale Contracting Ltd. and he was a part owner in Canada Photo in Winnipeg. Melvine put in the first water system in Seven Sisters Falls and did a cottage development in Washagamis Bay, Ontario when shortly thereafter he moved to Poplar Bay, Ontario. Melvine loved animals, had many pets over the years and liked to feed and watch birds at his home. Melvine liked to hunt, fish, go boating and was active in his church. Melvine was a pilot and loved to fly his plane. Most of all, Melvine loved visiting or going out for coffee or a meal with his co-workers, friends and family.
Due to current public restrictions, the family is holding a private interment at the Whitemouth Cemetery. When restrictions lift a Celebration of Life ceremony will take place hopefully in October 2021.