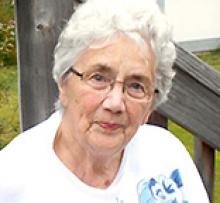 It is with heavy hearts that we say goodbye to Marjorie Ellen McIntosh, aged 84, of Powerview, who passed away on Friday, June 11, 2021, at the St. Boniface Hospital in Winnipeg.
Born on November 14, 1936, in Portage La Prairie, Marge was the daughter of Roy Vernon James and Jessie Isobel (Bella James) Dawson. She grew up on a farm in Portage Creek until they moved to town where she attended Portage Collegiate Institute. Following high school, she worked at the Bank of Montreal in Portage and this is where she met James (Jim) McIntosh, an Air Force man. The two were married on December 12, 1956 and lived in Nova Scotia, PEI, Germany, Ottawa, and Winnipeg Beach, after which Jim retired and they moved to Winnipeg. They raised three children together. Marge was happiest when surrounded by her children, grandchildren, and extended family. Her absence will be felt by many, as she treated everyone like family and went out of her way to make everyone feel special. Marge cherished her family and friends, and her creativity was a part of everything she did to show her love. Baking, crafts and art projects, sewing, knitting, nature walks, collecting rocks and leaves, going to the Zoo and the park, her dress-up box, and tea parties are some of the many ways she was intentional about making life-long memories. Her baking was famous - her butter tarts and dainties were everyone's favorite! She often volunteered at the Charleswood United Church with her dear friend, Shirley Waterman.
Marge was much loved, and will be deeply missed by her husband of 64 years, James (Jim) McIntosh of Powerview, her son, Glen (Juana) McIntosh, of Powerview, daughter, Jill (John) Barrett of Hibbing, MN, and son Dean (Tara Newman) McIntosh of Winnipeg; grandchildren, Adam Barrett, Michelle Robertson (Cam Finnson), Meghan Barrett, Rachel (Myles) Martinez, Justin Barrett, Mara Lara, CeCe Lara, Celeste Lara, Sheena, Brianna Welch, Brooklyn, Morgan, Avery and Linsey Newman; great-grandchildren, Isla and Bennett (Michelle and Cam), Mia and Natalia (Mara Lara), and Lincoln; and sister, Patricia (Al) Belinski of Winnipeg, along with many treasured extended family. She was preceded in death by her father, Roy Vernon James, her mother, Jessie Isobel (Bella James) Dawson, her brother, Vernon James, and infant sister June Elaine James.
A service will be held at a later date. Memorial gifts can be made to the Canadian Heart Association or the Canadian Cancer Society (Marge was a survivor of breast cancer).