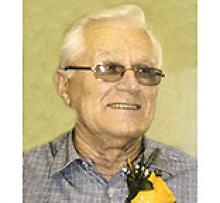 On Friday, June 18, 2021, Robert Joseph Chenier, 81, passed away at Bethesda Regional Health Centre, Steinbach, MB, after a brief battle with cancer.
Left to mourn: his loving wife Rita, daughter Michele (Bob) Stemich, sister Louise; brothers, Roger (Ida), Gilles (Louise), Tony (Cathy); brother-in-law Peter Brotherton, sister-in-law Margaret (John) Purcell, and many nieces and nephews.
He was predeceased by his parents, Antoine and Majella Chenier; stepfather Albert Vankooten; brothers, Omer, Lionel, and Ronald; and brother-in-law David
Robert truly enjoyed the dart team, gardening, woodworking (miniatures), card games and socializing. He was also a member of the Knights of Columbus.
Robert joined the Queen's Own Rifles - 1st Battalion in Calgary (1957 to 1964). He served three years in Germany.
He met Rita in England and were married in April 1963 and moved back to Germany and then transferred to Victoria, BC.
In 1966, they moved back to England for 11 years, returned to Canada in 1977, and resided in South Junction, MB. Then retired in Paradise Village, Ste. Anne, MB.
The family wishes to thank all the wonderful doctors and nurses at Bethesda who cared for Bob so well.
A private graveside service will be held at a later date.
If I had known it would be the last time I'd see you sleep, I would have covered you more tightly and pray the Lord your soul to keep.
So hold your loved ones close today and whisper in their ear, that you love them very much and you'll always hold them dear.