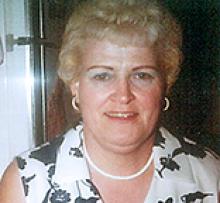 With great sadness we announce the passing of Marian at the Red River Place Personal Care Home during the early morning of July 1, Canada Day.
She leaves to mourn her sister Elsie Dorosh and Joyce Hanson of L.A.; nieces, Nadine Dorosh and Dori Hanson; nephews, Marlin Dorosh, Tim Hanson, Terry and Ken Kalawarny, and Mark and Pat Kalawarny; and Strohan brothers, Wayne, Richard, Dwight, Larry and Neil. Marian leaves her daughter-in-law Lori Betker; and grandsons, Brian II and Bryce in BC.
She was predeceased by her parents, Lena and Anthony; her two sons, Kevin Betker in 1985 and Brian Betker in 2007; dear friend John in 2017; sister Adeline in 2007; and brothers, Dan in 2014 and Edward in 2021.
Marian was born on October 7, 1928 in Winnipeg. She was a strong lady and worked hard. She worked at BMO Bank for 42 years and could sure tell some stories about some customers that came into the bank.
When able and feeling ok, she used to like going to South Beach Casino, playing the Knox machines and clicked on a jackpot a few times. Then they finally changed them and spoiled all the fun.
She liked going to the Legion for the over 60 club and of course to play the VLTs. She was a member of the Legion for many years and enjoyed going there.
In keeping with her wishes, cremation has taken place and no service will be held.
Donations in her memory may be made to the Heart & Stroke Foundation.

Rest in Peace Marian.
You will be lovingly remembered.

Condolences may be left on her tribute wall at www.gilbartfuneralhome.com