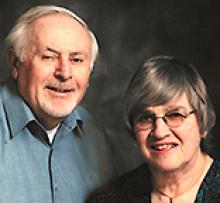 It is with great sorrow that we announce the passing of our parents, Sarah Chaytor (nee Pike) and beloved husband Eliol Chaytor, who passed away 14 months prior.
Eliol was born to Jesse and Pleasance Cheater (nee Ralph) on Flat Island, NL in 1934. Sarah was born to Graham and Sarah Pike (nee Sheppard) on Bell Island, NL in 1936. Although her mother died shortly after childbirth, she was lovingly raised by her father and stepmother Hazel Pike (nee Haley). Eliol and Sarah were married on September 2, 1961, in St. John's, NL.
They are survived by their sons, Michael (Wendy), Paul (Cheryl), and Stephen (Kristen), grandchildren, Evan, Ilsa, Duncan, Andrew, Richard, Walter, Jacob, and Charles, as well as Eliol's brother Arthur.
Shortly after their marriage, their life journey took them to Nova Scotia, New Brunswick, Ontario, Saskatchewan, and finally settling in Winnipeg in 1973. Sarah was a dedicated mother and stayed at home to raise their children and support her family while Eliol worked for the federal government for 34 years, retiring in 1989. During their retirement years they built a cottage at Victoria Beach where they spent many happy years. They were involved in several community groups including St. Saviour's Anglican Church, Toastmasters, and Eastern Star.
They are now together for eternity.
Special thanks to all the paramedics, doctors, nurses, health care aides from HSC, WRHA, palliative care and River Ridge 2 who provided outstanding care for both.
A celebration of their life together will be held on September 2, 2021, which would have been their 60th wedding anniversary. Details will be released once any COVID-19 restrictions are known. Online updates will be provided through St. Saviour's and Glen Eden.
Donations to their memory may be made to St. Saviour's.