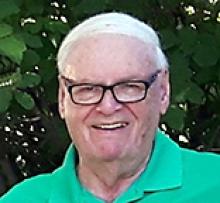 Jim was born in Medicine Hat, Alberta and grew up surrounded by many colourful family members, apparent by the numerous stories that he shared. The one boy surrounded by many girls and women, prepared well for the family he would eventually have.
As a youth, Dad lifeguarded and figure skated, among other pastimes. During high school, he was a mail-boy at the Ogilvie Flour Mill, launching his career in the grain industry. After graduating, he took a job with Ogilvies in Winnipeg, then transferred to Edmonton. With destiny's help, in 1957 Dad met our Mom, his sweetheart Shirley, who lived across the hall in the building they inhabited with 75 other single people! He was promoted into the role of grain Traffic Manager back home in Medicine Hat, and it was here that all four of us daughters were born. Transferred again to Winnipeg, our family settled in. Hard work took Dad up the corporate ladder into the position of Senior Officer for Western Canada, which held a seat on the Grain Exchange. A grain man throughout his official working years, he last worked for United Grain Growers.
Dad's value for family is deeply instilled in us. Our childhood was filled with the bounty of his creativity. He was renowned for the celebrations he organized, from special birthday parties for us, to elaborate costume parties that his wide circle of friends and extended family looked forward to. We still love looking through the photo albums he put together that document this legacy.
Dad loved to camp and we explored many beautiful places. He and Mom eventually set up camp in Birds Hill Park, where he was volunteer campground host for eight years, a perfect fit for the people-person that he was. When Dad and Mom retired out to Winnipeg Beach, he quickly got involved in the community and his circle of friends continued to grow. Over the years, he volunteered for COPPS (local neighborhood patrol), Legion events, was active in the Seniors Club, played in golf, card and cribbage clubs, and was on the planning committee for the Winnipeg Beach Centennial.
Dad had a big heart and reached a helping hand out to anyone in need. While in hospital recovering after surgery last year, he bought his 'roommate', who he of course befriended, a much-appreciated bus ticket home to northern Manitoba. That's just who Dad was.
Dad was an avid historian. This passion led him to a long volunteer career with the Manitoba Genealogical Society (MGS) Library. He traced six of our family trees, unearthing some interesting stories, and with his research team helped people worldwide trace their roots. He dedicated countless hours archiving Winnipeg obituaries. Dad worked at MGS for 25 years, and only recently resigned his position as Chair of the Research Department due to the progression of his illness.
Dad was able to stay at home in Winnipeg Beach with Mom with the help of us daughters for most of his illness. Our heartfelt thanks to the homecare nurses who assisted with his care the last few weeks. Extreme gratitude to the Gimli Community Health Centre staff, in particular the nurses who cared for him his last few days and hours. The compassion of many allowed our family to be together his final few days until the moment he passed. Special thanks to Dr. Paul and Dr. Nashed, who cared for him throughout his illness; Dad held high regard for you both.
Jim is lovingly remembered by his wife Shirley; daughters, Sheryn (Glenn), Brenda, Jill (Mark), and Joy (Dave); grandchildren, Steve, James, Leanne, Tyson, Bailie (Ray), Quinn, Amory, and Sammy; close cousins, Pam (Bill), and Peter (Linda) and loving extended family. He was predeceased by his parents, Archie and Jean, and sister Barbara.
The family will have a private Celebration of Life and continue that on a daily basis.

We love you Dad,
you will be greatly missed.

Donations in Jim's name can be made to CancerCare or the MGS Library.