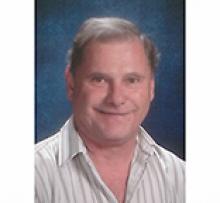 On Friday, June 25, 2021, Richard Spuzak, aged 67 years, suddenly passed away at his home in Selkirk, MB.
Richard was born to John and Gloria Spuzak. He grew up in rural Sandy Hook, then settled in Selkirk. Richard worked at the Steel Bros. Sand Plant, then at Selkirk High School where he enjoyed over 20 years as a custodian until his retirement in 2019.
He was a jack of all trades with a passion for cars and loved tinkering with his lawn mower and snow blower.
He was predeceased by his parents, Gloria and John Spuzak; and brothers, Andy and Tim Spuzak.
He is survived by his daughter Valerie, and three grandsons, Trey, Jesse, and Matthew; siblings, Phillip (Donna), Daniel (Fabienne), Steve and Esther (John), and many nieces and nephews.
Memorial to be held at a future date.