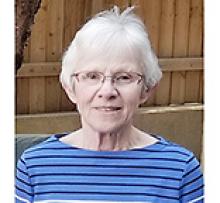 With broken hearts, the family of Eva Roth announce her passing on July 6, 2021, after a battle with cancer. Mom passed peacefully with family at her bedside.
Born in 1943 in Borovnica, Slovenia, Eva was the fourth of five children in a farming family. In 1966, a young, handsome farmer from Fannystelle, MB was visiting his Slovenian relatives near Eva's home and happened to meet Eva. A romance began, and in 1967, Eva left her family and home to move to Canada to marry her fiancé, William, and begin their married life on the family farm. Eva arrived not knowing much English, which wasn't easy for her, but she quickly picked up the English language. Mom was able to balance full immersion into Canadian life with the support of her extended family (who were also originally from Slovenia) as well as a strong Slovene community in the Winnipeg area.
Farm life was busy, particularly with the arrival of three children – Barbara, Donna and John. The growing season was always a busy time for Eva with a large garden to plant, tend to and harvest, in addition to several fruit trees. We remember the long hours Mom would put in canning tomatoes, making pickles, jams and jellies and turning the apples into apple pies to be frozen, on top of the regular household work. Mom was a fantastic cook, a believer in "from-scratch" cooking, sometimes to the dismay of us kids who, at the time, thought we were being deprived of the processed food we saw our friends and classmates consuming. Mom had us eating whole wheat bread and granola before they became fashionable, and Kraft Dinner was an occasional "treat". Mom also cooked and baked traditional Slovene food such as goulash, strudel and potica. We were proud of Mom when she decided to learn to drive and obtained her drivers license later in life (after the kids had gotten their licenses and she decided to pursue the independence to drive herself where she needed to go).
Eva was a person of strong faith, which helped her cope with some difficult events, including the loss of her son John in 1995, and the passing of Dad in 2018. It was extremely rare for her to miss attending Sunday Mass, and she continued to attend "virtually" (via a televised recorded service) throughout the Covid pandemic.
Eva will be remembered as a gem of a person, with a heart of gold and a quiet, kind and gentle demeanour. Modest and humble by nature, she was a strong community supporter, contributing to fundraising events such as bake sales, and with Dad, attending community events. Both she and Dad are remembered as pillars of the Fannystelle community where they lived most of their lives.
After Dad's passing, Mom made the decision to sell the farm and moved to Winnipeg to be closer to Donna and family. She bought a condo at Lindenholm Place and enjoyed her time there with the new community she found and the friends she made. Donna will greatly miss walking over to Mom's place and having a visit with her.
Eva leaves to mourn and celebrate her life daughters, Barbara (David) and Donna (Doug), granddaughters, Eryn and Kenna, sister Eli, brother Janez and sister-in-law Marija, brother Tone, sister-in-law Milka, brother-in-law Albert and sister-in-law Helen, brother-in-law Donald (Mairi), and nieces and nephews in Canada, the US and Slovenia. Mom's friends from Winnipeg, Fannystelle, Starbuck, Elm Creek and Carman areas, as well as her friends at Lindenholm Place, will greatly miss her.
Eva was predeceased by her beloved husband William, son John, brother Ciril, brother-in-law Roger, sister-in-law Mary, sister-in-law Diana, brother-in-law Lovro and sister-in-law Milena.
The family would like to thank all the members of Mom's health care team who worked hard to extend her time and minimize her pain and discomfort. Thanks to Dr. Lu, Dr. Gordon, CancerCare Manitoba and Palliative Manitoba. Immense thanks as well to the St. Boniface Palliative Care Ward and their tremendous team for their professionalism, dedication and compassion.
A private funeral service will be held at the Sacred Heart of Jesus Roman Catholic Church in Fannystelle, Manitoba on Tuesday, July 13, 2021.
The funeral service will be available to be viewed at 2:00 p.m. at www.afh.ca. If you would like your name to appear in the guestbook, please email your name to office@afh.ca - re: Eva Roth.
Flowers are gratefully declined. Friends who so choose could consider donations to Canadian Cancer Society, CancerCare Manitoba or a charity of their choice.

To view the service and leave condolences, please visit www.afh.ca