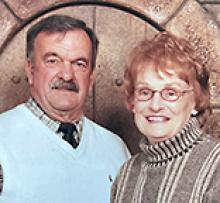 On Wednesday, July 7, 2021 in Winnipeg, Manitoba, Roger Joseph Blanchard, aged 88 joined the love of his life Mryna Marlene Blanchard after a hard-fought battle with Parkinson's disease. Myrna and Roger lived a true to life fairy tale that brought them back together with his passing on her birthday.
Roger was an ironworker and he built telecommunication towers all over Canada, the US, Russia, Greece and Australia. After they retired Myrna and Roger spent their time travelling the world and making many friends along the way. Roger was an amazing man with many talents. He was a devoted and loving husband and in the later part of Myrna's life was her rock while she battled the health issues that would take her from us. He was an extremely intelligent and hard working man, always making time for anyone that needed help and he was generous to a fault.
He will be missed by daughter Sandy McNaughton and son-in-law Daryle Gessner in Winnipeg, and by daughter Lesa Stadnek and son-in-law Gary Stadnek and grandson Declyn Stadnek in Kelowna, BC. Roger is survived by three sisters in New Brunswick, Andrea, Anne and Anita.
We would extend a special thank-you to all the staff at Tuxedo Villa for making Roger's last years so special.