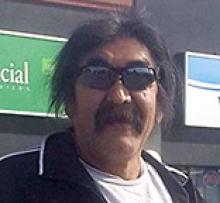 It is with great sadness and love that the family and friends announce the sudden passing of Raymond (age 66) on July 9, 2021.
Raymond will be forever loved and missed by his daughters, Charlotte (Earl), Posie (Jessie) and Desiree (Larry); and his grandchildren, Malcolm, Blair, Civil, Connor, Treton, Michael, Rosie, Leon, Allora, Mercy; and his great-nephew little Sweets; his mother Mina Smith; brothers, Carl, Clarence, Marvin, Gerald, Kelvin, Wendell and Emery; sisters, Bev, Glenda, Marlene and Debbie. Raymond had a special relationship with his nieces and nephews and great-nieces and nephews and each have many fond moments, stories and the wordsmith expertise of their Uncle Satch - Uncle Hatch to some. He had a special bond with his cousin Robert Stove and the Sinclair family; cousin Lawrence (Rabbit) Grisdale; elder Clarence Chartrand and will be missed many other close relatives and friends all over Turtle Island.
Raymond will be greeted and welcomed into the spirit world by his father Lawrence (Happy) Smith; grandparents, Peter and Bella (nee Sinclair) Jones, and Henry and Armilene (nee Guimond) Smith; aunts and uncles, and cousins.
BaShigo Makwa's life is best described in the words of his cousin Paul Guimond - "Ray had a tough life but a good life and at the end, he did what he had to do".
Viewing will be held on Wednesday, July 14, 2021 from 7:00 p.m. to 10:00 p.m. in the Private Tom Chief Hall. Funeral services will be held on Thursday, July 15 at 1:00 p.m. also in the hall.
The family would like thank the St. Boniface Hospital doctors and nurses on Ward 7A for their compassionate care of Ray during his short visit with them.


"For precious moments in life
there are no words"