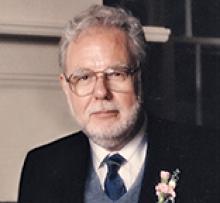 
In his sleep, Friday, July 16, 2021 at the age of 84 years. Husband of 62 years of Emma (Bourrier). Predeceased by his parents, René and Janneke (Haak), and his brother Henry (Henrietta, née Blanchard) of Winnipeg. Brother of Denise Landry (Gerard, deceased).
Survived by his four daughters and sons-in-law: Cindy (Ross Knight), Rachel, Dorothy (Thane Heins) and Mary (Christopher G.H. Wells); and six grandsons, Matthew Ouimet, Robert Ouimet, Nathan Yee, Nicholas Cheney, Justin Yee and Christian Ouimet.
Don was born June 15, 1937 in St. Boniface, Manitoba (now a suburb of Winnipeg) three months after his parents returned from Port Kells, BC, as the country was coming out of the Great Depression. Four days later, Fr. Damas baptized him at the Belgian Sacred Heart Church. In 1944, Bishop Cabana confirmed him at the St. Boniface Cathedral. He was educated by the Brothers of Mary (Marianists) at Provencher Collegiate Institute, located a half-city-block from where he was born. Fr. Léo Couture married Emma and Don in 1959 at the St. Boniface Cathedral. Cindy was born in Port Arthur while Don was stationed at the Lakehead (now Thunder Bay) Airport; all other children were born in St. Boniface.
He joined Transport Canada in September 1956 as an Aeradio Operator Learner in Kenora, Ontario. While in training for Instrument Flight Rule control, he was a founding member of the Canadian Air Traffic Control Association and later was the Treasurer of the Winnipeg Branch under John-David Lyon. At Red River College (Winnipeg) he took night courses in computing. While at Transport Canada headquarters, he took management, law and financial night courses at Algonquin College and the University of Ottawa. He was often too busy for his family while they were growing up, because of his studies and his tendency to being a workaholic. He retired from Transport Canada after 35 years and 7 months as a special assistant to the Director, Air Traffic Services.
In retirement he was a willing helper, particular in tasks on his computer. He assisted many people to move into the computer age, some whom still call or e-mail him for advice. Since he was impatient to get jobs done rather than talking about them, he avoided meetings. He was active in the Ottawa Cursillo Movement and served on the secretariat. He also served in the Steering Committee of the Mission of Redeemer Men's Apostolate and as an executive member of the Knights of Columbus St. Edith Stein Council 13049. For many years, he provided secretariat services to the Gospel of Life Apostolate and served as Financial Secretary/Treasurer to Our Lady of Divine Love Parish, Pendleton, Ontario.
In life, Don sought God; in his death, he finally found Him.
Don wrote his own obituary so he could share and celebrate his beloved family, his heritage and his accomplishments.
A private Memorial Mass for Don will be celebrated at St. Maurice Parish, 4 Perry Street, Ottawa, ON Friday, July 23, 2021. We invite anyone unable to attend, but still wanting to participate to please use this link: www.livememorialservices.com/Home/ServiceDetail/14993, to watch the recording of the Memorial Mass via live stream after 3:00 p.m. on Friday.
Instead of flowers, mourners may contribute to Our Lady of Divine Love Parish, Pendleton, 2084 Concession 10 Road, CURRAN Post Office, ON K0B 1C0.