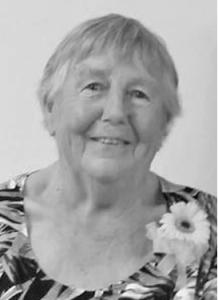 DITTMER- Helen Anna Dittmer passed away suddenly on June 24, 2021 at the Pasqua Hospital in Regina, SK, just 6 days short of her 85th birthday. Helen was born June 30, 1936 to William and Annabelle Opper. One of six children growing up on the family farm near Antler, SK. On August 12, 1953 she married August Dittmer and settled on their farm northwest of Sinclair, MB. There they were blessed with seven children and adopted their grandson Lonnie. In 1981, Helen and August moved to Antler SK. She belonged to the Antler Guild and worked for over 30 years at the Antler Hotel. She was well liked for her friendly nature and huge smile. Her home was always open to who ever needed it. She took in pipeline workers, duck hunters and her beloved deer hunters from Winnipeg, that came every year for over 20 years. They became her extended family. She was predeceased by her husband August, son Lonnie, grandson Jason, son s-in-law Barry Blezy and Don Binions, sister Clara Jean Nash and brother Dennis Opper, parents William and Annabelle Opper, and numerous brothers and sisters-in-law. Mourning her loss are her seven children, David (Charlene) Dittmer, Swan Lake, Brenda Flowers of Calgary, Blake (Lorraine) Dittmer, Redvers, Leanne Binions of Brandon, Alvin Dittmer, Indian Head, Sherri Dittmer (Brent Ries) Lumsden and Vicky Blezy of Antler. 16 grandchildren and 14 great-grandchildren, sister Beverly Dittmer and brothers Hartley Opper, Robert (Rose) Opper, and Winston Wiley and numerous nieces and nephews. We felt her mission in life was to feed people and her favourite saying was "this ain't a very fancy way to feed everybody", which was like her version of grace. A family funeral was held July 2, 2021 at the Antler Hall with internment in the Antler cemetery. And now those "Hard Working Hands Are Laid To Rest"