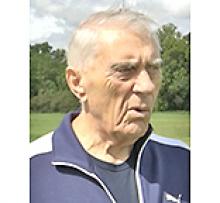 It is with deep love, but great sadness, we announce the peaceful passing of our father, our "World, our "Centre'', our "Everything".
Morris is survived by his children, Cindy Ponton and son-in-law and Brian #1 (Lenton), Sharon Ponton-Ezako and son-in-law and Bryan #2 (Ezako), son-in-law Joe Pereira and partner Edith Kovacs. Grandchildren who were the light of his life, Troy Pereira, Tory Pereira, Sam Pereira, and Daniel Pereira. He was predeceased by his father George, his mother Margaret, his brother Morley and Phyllis, his wife of 62 years.
Morris was born in Wabigoon, Ontario and started his life in a small cabin in the woods. The family eventually made the big move to Winnipeg. Morris loved education, and learning, but unfortunately had to leave school to start working early. Before settling into his career, he joined the army and was a decorated veteran of the Korean War. Something he spoke of often in his later years. Morris found a way to laugh his way through life and the war was no exception. He found humour in everything, and his advice has always been, not to take life too seriously.
Returning from the war, Morris embarked on his career at the Winnipeg Hydro, where he started on the pole gang, and ended up as supervisor of stores. The tales from his days of the hydro are filled with much humour and much laughter.
Morris retired after 42 years with the Hydro and moved out to his little piece of paradise in Anola, Manitoba. He spent many years on this acreage which was his pride and joy.
Morris did return to Winnipeg with his wife for the last little bit of this journey but missed being out in the country.
To those who knew our Dad, you knew what a large presence he was. He brought laughter with him everywhere and was a loving and generous man. We learned early that there was always room at the table for more, and that people and the "occasional" party were some of life's greatest joys.
He was also a man of music, and it was part of his heart and soul. He was an incredible dancer, and to watch him do the jive was a joy to behold.
And if you were fortunate enough to know our Dad you would also know that his love for animals, and especially dogs took precedence over some human beings. (Yes, seriously.)
Above all, Morris was a man who put his family above everything else. Us, his daughters have known a love so strong, that even death will not break this bond. His grandchildren have benefited from his ability to love them above and beyond all else. He was and is immensely proud of all of them.
His enormous presence will be missed.