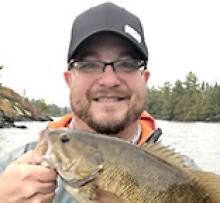 It is with great sadness, and much love, that we announce Ray Ettenhofer's sudden passing on July 14, 2021.
Anyone who ever met or knew Ray, knew one thing, how much he loved and cherished his wife, best friend, and soulmate Stephanie and their sweetheart daughter Lana. Their love infinite, strong, and undeniable. They will forever love and miss him. Ray also leaves behind his loving family: mother Maria Reitz (Colin Lang); father Ray Sr. Ettenhofer (Phyllis Lightfoot); siblings: Nik Ettenhofer, Tara Lang, Chris Melnyk, David Lang (Clare Lang); stepsiblings: Angie Lightfoot, Scott Lightfoot; family-in-law who considered him a son and a brother: Maria and Howard Thiesen, Sabina Border, Dustin Thiessen (Natalie Thiessen); many aunts, uncles, cousins, nephews and niece. The bright light that was Ray will not grow dim in their family.
Ray was born April 8, 1976 to Maria and Ray Sr., and grew up in St. Vital, Winnipeg, MB. He was a caring son who lovingly watched over his younger brother Nik. They had a close bond. As a kid, Ray was happiest at his family cottages in Loche Bay, and Cliff Lake. He spent hours swimming, fishing, and hunting groundhogs with his Opa.
In his teenage years, he attended Hastings, and Dakota High School where he made lifelong friendships with an eclectic group of friends. The rappers and the headbangers. Of course, Ray was the headbanger. He was the one with the long hair, wearing Megadeth, Slayer, and GNR t-shirts. The heavier the metal the better for him.
At the young age of 12, Ray found his gift, his talent…his guitar. Ray first started playing on his dad's guitar, a 12 string. Soon after, his Oma gave him a Gibson Les Paul and amp. From that point on he was hooked. His parents sent him to various music lessons. They were short lived because in a short time, his music teachers would tell him he knew more than they did on the guitar. Maria has vivid memories of him rockin out to Bon Jovi at home. His first concert was at his graduation. It was a hit. From that point on, he became a rockstar. He played in numerous bands: Chelsea Drugstore, Autumn High, Bliss, and Gin Taxi. He travelled across Western Canada and opened for big bands like The New Meanies, Paul Rodgers, and Skid Row. His sweet guitar licks and tricks wowed so many. He also spent many years spinning as a DJ, DJ Rayne. He had fans everywhere, even in Europe.
Then when Harry met Sally...I mean, when Ray met Steph years later at Dufresne, he found his soulmate. It was kismet. They married and then had their precious daughter Lana. He adored his little girl and was so proud of her in every way.
Ray had so many talents for so many things because he was a man of many passions. And you always knew where he stood. He was never afraid of sharing his opinion, views, and knowledge. If something wasn't right, he'd speak up…because he cared. He had a very special way of feeling everything. He taught many people how to love, hear, and listen.
His many other passions included: being a good husband and father, making memories with his family/friends, music, his career, politics, the environment, fishing, bonfire/ backyard/basement jams, sharks, scuba diving, travelling, Zelda, Game of Thrones, and August long. Just to name a few.
Ray's quick funny wit, affection, honesty, and passionate love for so many things, drew so many people to him. We are all so lucky, grateful, and happy for all the moments we had and shared with him. There are so many Ray stories. He cared deeply for all his family, friends, co-workers and took care of so many people. He always had our backs.
Here's hoping that once in a while, we'll hear you playing from the heavens for us Ray. We will forever love and miss you. Thank you for coming into our lives. Even though it was too short, and you were taken away from us too suddenly. It was a privilege and an honour to know you. You left behind a beautiful legacy Ray. You will not be forgotten.
Please note that Ray's Celebration of Life occurred on Friday, July 23, 2021. Unfortunately, not everyone could be invited due to covid restrictions. There will be a link available for those to watch the Celebration of Life and additional messages in the days to come on various social media channels.