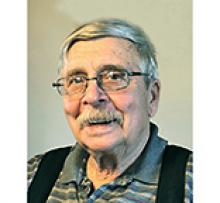 With heavy hearts we announce the passing of our beloved dad, Walter Denis Altstadt, on Tuesday, July 20, 2021 at Grace Hospital.
Left to cherish his memory are his four children, Dale, Shelley (Perry) Stewner, Dayna MacDearmid, and Stephen (Sheila); grandchildren, Amanda, Allison, Alanah, Courtney (Kris), Whitney (Colin), Marissa and Andrew; great-grandchildren, Haylee, Kayden and Rhett; his brother Glen (Linda); sisters-in-law, Betty and Dorothy; his stepdaughters, Shelley and Tracey and stepgrandchildren, Sydnie, Brenden and Keri-Anne; many relatives and friends.
He was predeceased by his stillborn son, parents, William and Hulda (nee Howk), brothers, Arnold, Kenny and Ronald, sister Leona, and recently by Dale's wife Debbie.
Denis was born on the family dairy and grain farm in Seven Sisters Falls, Manitoba. He married Donna Dales in 1958 and together they raised their four children in various Manitoba Hydro communities. His career with Manitoba Hydro began in 1954. He held various positions, eventually becoming Operating Supervisor for both Hydro Dams and Converter Stations. He was proud of the programs he developed and operator training that he provided. He was thrilled to be responsible for the startup and operation of Kettle Generating Station in Gillam, the largest dam in the province at the time. He retired from Dorsey Converter Station after 39 years with Hydro.
He always maintained his connection with the family farm and returned to help out at harvest time whenever he could. After he retired, his love of the farm drew him back and he designed and built his own home within sight of where he was born. He eventually returned to Winnipeg where he continued his independent lifestyle until he passed.
He was an exceptional father, grandfather and great-grandfather, and enjoyed nothing more than spending time with his family, always putting others' needs ahead of his own. He loved a good game of crib or push. He was an amazing cook. His soups, shortbread cookies and sauerkraut were second to none. He loved to puzzle, garden, sit by a campfire, travel, and spent many winters in Texas. He was an expert Toastmaster and was often called upon to speak at special occasions.
He always had a project on the go, whether he was restoring a car, fixing a tractor, tinkering around with anything mechanical or deciding what to build next. His 1955 Dodge Mayfair was a show winner. He was proud that he was one of the first to recognize recycling, often returning from the dump with more than he dropped off.
Thank you from the bottom of our hearts to his good friends, John and Irene. Thank you to the Winnipeg Firefighters and Paramedics for their kindness.
Cremation has taken place. He will be interred at a private family gathering in the fall at St. Paul Lutheran Church, River Hills, Manitoba.
In lieu of flowers, we encourage you to donate to CancerCare Manitoba, or a charity of choice.

We know you are breathing easy now Dad.
We hope Heaven is stocked with Chivas
and that you know we carry you
in our hearts forever.