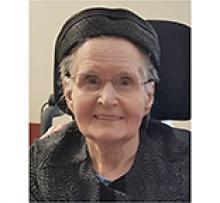 Mom was born on December 20, 1926, to Peter P and Helena Friesen at the Thiessen farm in the village of Hoffnungsfeld, southwest of Winkler, MB. She was the second of eleven children. Upon confession of faith, mom was baptized at the Winkler Sommerfeld Church on May 29, 1947. Mom married John A Peters on October 9, 1955, and they began what would be 34 years of farming in Burwalde and services to church. Their marriage was blessed with three sons and one daughter. Dad passed away on May 1, 1990. Mom moved to Winkler in 1991, and began a new chapter in her life when she married Reverend John Penner on March 21, 1992. They lived in Winkler for a few months and then moved to Grunthal. With their marriage, mom welcomed another daughter, two sons, one daughter-in-law and three more grandchildren into her life.
Mom's health gradually deteriorated over the past five years. She spent the last three years at the Menno Personal Care Home until her passing on Monday, August 9, 2021.
Left to mourn are her husband, Rev. John Penner, daughter, Sheila Froese and her husband Bill, son Doug Penner and his wife, Lisa, and son Terry Penner and his wife, Laura, nine grandchildren and seven great-grandchildren. Also left to mourn is her biological family, son Albert John Peters and his wife, Kathy, son Bill Peters and his wife, Lee, daughter-in-law Wendy Peters, and daughter Ruth Pauls and her husband, Albert, 13 grandchildren and 20 great-grandchildren as well as three brothers, one sister and their families. Mom was also predeceased by her son, David in 2019.
Rest in peace, mom, your battles with aging, Parkinson's and dementia are now over. Your loving family.
Funeral service was held on Sunday August 15, 2021, at the Winkler Sommerfeld Mennonite Church with interment at the Rosenbach Cemetery.