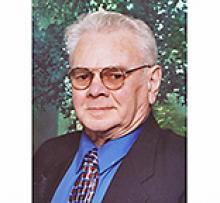 In the early morning hours of Monday August 30, 2021, the Lord called Henry Dyck, beloved husband of Loreena, home to his eternal rest. Henry passed away peacefully at the age of 93 years at the MacGregor Care Home.
Henry was born on August 20, 1928, in the Morden area, to parents John and Katherina Dyck. He was the third youngest in a large family of 11 children, giving him seven brothers and three sisters. As a boy, he was often called "Sonny" by the family, and this name stuck, as some nephews still later called him "Uncle Sonny". Along with the family, Henry endured many hardships in his life. His mother died when he was only two years old. Then when he was 14, Henry had to quit school and help on the farm when some of his brothers had to leave home to serve as conscientious objectors during the war. Later Henry himself went for training in the military, and served in the Airforce from 1949-1954.
While in the military, he earned the nickname "Morty", and so many of the family members also got onto calling him "Uncle Morty." Henry's life however took a drastic turn after he and his brother Jim were in an airplane accident in 1955. Jim later passed away, but the Lord spared Henry's life. Henry was, however, unconscious for 3 weeks, and later had a long recovery, including how to walk and talk all over again. The doctors thought he would be in a wheelchair the rest of his life.
Henry did make a miraculous recovery though, and it was after this that he went to work up in the North. While attending church one day in Churchill, he accepted Jesus as his Saviour and Lord, and he was later baptized upon his confession of faith. After he was saved, Henry had a strong desire to serve the Lord, and this continued throughout his whole life. He received some training for Christian service at Fort Qu'appelle, then went to Bible school for 3 years at Millar Bible Institute in Pambrun, SK. After this he spent quite a bit of time doing mission work in places such as Vancouver Island and also in the North, including helping to build a church at Eskimo Point.
Henry and Loreena met on Thanksgiving weekend in 1977 in Warman, SK. Henry visited the church that Loreena attended, and with the help of a few local matchmakers, including the Pastor, their relationship started. Well, it was a match made in heaven, as Henry and Loreena were married on April 1, 1978. Since that time, Henry and Loreena were inseparable, and demonstrated what it looks like to be faithfully committed to one another in marriage.
Henry and Loreena's life took them from Morden, to Steinbach, to Landmark, to Winnipeg, then to Portage la Prairie in 1991, and finally to MacGregor in 2019. Over the years Henry worked many different jobs, including at the Cannery in Morden, Rest-Haven home in Steinbach, Broiler farm in Landmark, Custodian at MCC in Winnipeg, and selling Watkins. He also at times worked as a carpenter. In their retirement, Henry and Loreena also made many quilts together for Faith Mission. In 1998, they made the Bagot Community Chapel their church home. Their life together has been characterized by walking by faith and serving the Lord wherever they went. Henry would often say, "Let the Lord take care of it."
Over the years Henry thoroughly enjoyed playing baseball, hunting, playing guitar, gardening, reading, cooking, puzzling, and playing games. He also had a particular love for horses, and for music. He loved singing and at one time sang in a men's choir. And of course, he also enjoyed food, and always had a very good appetite!
On July 2, 2019, Henry made his final move to the MacGregor Care Home. This was a difficult time for Henry and Loreena, as was the isolation that came with covid. However, things changed and Loreena was again able to faithfully visit Henry. Even with the changes that came during these last few years, Henry was always cheerful, never complained, and adjusted well. The last while when he was no longer able to speak, he would use his fingers to communicate. God was giving Henry grace for his final days on the earth, and thankfully he didn't have to suffer long before the Lord called him home. Special thanks to the nurses and staff at the MacGregor Care Home for their wonderful care and compassion during Henry's final days.
Henry was predeceased by his parents, six brothers and three sisters.
He leaves to mourn his passing his loving wife Loreena of 43 years; brother Jake and sister-in-law Grace Dyck, sister-in-law Alfreda Dyck, as well as Loreena's family and numerous nieces, nephews, relatives and friends.
A private funeral service to celebrate Henry's life was be held at McKenzie's Funeral Chapel with Pastor Michael Fehr officiating. Interment followed in the Oakville Cemetery.
As expressions of sympathy, if friends so wish, donations may be made in Henry's memory to Siloam Mission or Faith Mission.
More pictures of Henry's life have been compiled and can be found at https://mccasa.ca/?page_id=5273
One of Henry's favorite greetings was to say to a friend "top of the morning to you!" Henry, "we will meet you in the morning over there" in Glory.