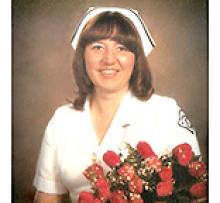 It is with profound sadness that we announce the passing of our beloved Sandra Belisle (née Byhre), who passed away Friday, September 17, 2021, after a courageous battle with cancer. The loss of such a strong, compassionate and giving woman leaves an unimaginable void in the many lives she touched.
One of six children, Sandy was predeceased by her beloved husband Andre Belisle, her parents, Clarence and Edith Byhre, and her brother-in-law Jack Henry.
She leaves behind her children, Harry (Rebecca), Jill (Dean), and her grandchildren, Jennifer, Jessica, Caelan, Nicole and Andrew, as well as her siblings, Bob (Jean), Carol, Brenda (Biagio), Bryan (Theresa) and Tanyss, as well as nieces, nephews, cousins and many close friends.
Sandy lived a truly extraordinary life, based on service and devotion. Her career choices exemplified and reflected her caring and giving nature. First she graduated nursing school earning the Lieutenant Governor's Award for scholastic achievement, then within the Lutheran ministry where she was a spiritual advisor and organizer of various outreach services and responsible for parish nursing programs.
Sandy fell in love with Aboriginal people and their culture when she first began nursing in various nursing stations in Northern and Central Manitoba. She was made an honorary medicine woman and given the name 'Thundering Woman' and her spiritual totem animal of the bear, which gave her much pride. Winnipeg inner city mission was a place she was able to touch many lives as well, offering nursing, nutritional and spiritual counselling. Sandy also loved to participate in sweat lodge ceremonies, native drumming circles and traditional Aboriginal medicine and spiritual practices.
Sandy fell in love with Andre in 1989 when she met him in Ottawa. He was truly the love of her life and the two enjoyed many happy years together until his death in 2014.
Sandy's children meant the world to her. Jill stayed with her for six months during her cancer treatments this past year, and the two of them found joy and laughter with one another throughout that difficult time. Sandy often mentioned that was one of the - ironically - best times of her life, thanks to the devotion of her daughter.
Harry brought her a lot of laughter, and the two were always close. He and she shared a similar sense of humour and enjoyed very much their lively and loving debates.
Sandy had many friends, but was probably closest to her cousin Judy and sister Brenda who she referred to as 'her best friends in the world'.
Sandy also leaves behind her beloved dog Shasta. Her cousin Judy has adopted Shasta as her own now, and that act of love brought such comfort and peace to Sandy.
There are countless people to thank who have been there to support Sandy throughout her life and during the past challenging year. The doctors, nurses and all the staff at CancerCare Manitoba and Riverview Health Centre, Palliative Care Unit provided phenomenal care to our beloved sister. Thank you also to Pam who drummed for Sandy in her last hours, ushering her with peace into the next world.
We are consoled by the fact that her faith prepared her to move into the next level of consciousness and to be reunited with the many she loved who passed before her. She welcomed that next adventure and was remarkably eager to see 'what happens next'.
In lieu of flowers, donations can be made to the Lutheran Urban Mission or any charity that calls to you. And most importantly - be kind to one another. Feed someone who is hungry. Give a blanket to someone who is cold. That's what she would want. That's who she was.
A celebration of Sandy's life will be held on Monday, September 27 at 11:30 a.m. at Thomson Funeral Home, 669 Broadway. Current Covid safety measures apply. A private family interment will take place prior to the service.