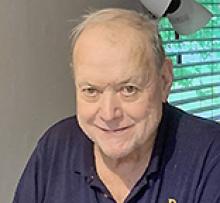 It is with great sadness that we announce the sudden passing of Ernest "Ernie" Carrière, at the age of 76.
Ernie was born on December 10, 1944, and grew up and went to school in St. Adolphe, Manitoba. On May 21, 1966, Ernie married Gloria Andrechuk and started a family in Winnipeg.
Upon his graduation from civil engineering at the University of Manitoba, Ernie accepted a position with the City of Winnipeg, retiring after 40 years of service in 2007. Ernie and Gloria raised their four sons in Windsor Park and spent a lot of time at their cottage in Petersfield.
Ernie was predeceased by his father Charles, mother Rose-Anna, brother André, and grandson Alexander.
He leaves behind his wife Gloria and his four sons: Leslie (Elizabeth) of La Salle, Manitoba and children, James and Katherine; Darryl (Lori-Ellen) of Kelowna, British Columbia and children, Dane and Kelsey; Clifford (Cheri-Lee) of Fort Frances, Ontario and children, Caelan and Emily (mother Lori-Ann); and Kevin of Petersfield, Manitoba and children, Madison and Charles (mother Theressa). He is also survived by his sisters, Ellen (Rene) Gratton and family, Eveline (Armand) Lévesque and family, Huguette (Marc) Phaneuf and family, and his sister-in-law Joy Carrière and family,
Ernie's cremains were laid to rest at the Saint Boniface Cemetery at a graveside service held on October 8, 2021, with Father Armand Le Gal presiding.