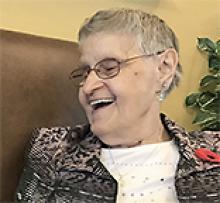 It is with sadness that we announce the passing of Mary, beloved mother, grandmother, great-grandmother, sister and aunt.
Mary was born November 10, 1926 in Tolstoi Manitoba, one of five daughters of Peter and Katherine Machodanski. She later moved to the city of Transcona, Manitoba, where she lived for most of her life until 2012, when she moved to Regina.
Mary was predeceased by her first husband Anthony Bilyk, her second husband of 53 years, Joseph Elnisky, and sisters, Anne Spilchuk, Pauline Kowalski and Theresa Balichowski. She is survived by her loving daughter Donna (Harlan) Kennedy, sister Sally (Longene) Karchewski, granddaughters, Beth (Todd) Hodge, Alexis (Tim) Langen, great-grandchildren, Oliver and Orion Hodge, and Harrison and Penelope Langen, and many nieces and nephews.
Mary worked for Perth's, Eaton's Catalogue Centre, and Johnson Nuts, but she was most proud of the home she kept for her husband and daughter. She loved to cook and entertain her family and friends, and made sure no one ever left her house hungry. In the 1970s and 80s she brought that passion to her job at Ludwick Catering for many years.
She and Joseph were active members of the congregation of St. Michael's Ukrainian Catholic Parish in Transcona, and she spent many hours in the kitchen with the Catholic Women's League.
After her husband Joseph passed away in 2011, Mary moved to Regina, SK to be closer to her daughter, son-in-law and grandchildren and was happy to be blessed with four great-grandchildren.
The family wishes to thank the staff of Emmanuel Villa in Emerald Park for taking such good and loving care of Mary.
A private, family funeral service will be held at St. Michael's Ukrainian Catholic Parish in Winnipeg, followed by interment at Transcona Cemetery.
Flowers are gratefully declined.