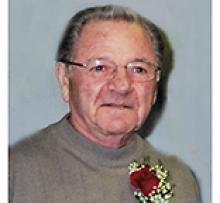 It is with great sadness that we announce the passing of our beloved father Gerard. Dad passed away peacefully at his home on November 21, 2021.
Gerard will be deeply missed by his sons Raymond (Gisele) and Paul (Rose-Marie); granddaughters, Elisabeth, Julie, Véronique, Victoria, and Valérie, and eight great-grandchildren. He also leaves behind his brothers, Roland, Gilbert, and Charles; his sisters, Lea, Lucille (Gerard), and Florence; as well as many in-laws, nieces, and nephews.
Gerard was predeceased by his loving wife of 38 years Germaine (née Maynard), his son Gilles, grandson Luc, parents Georges and Eliza, sister Lorraine, and brother Louis.
Dad was born on October 3, 1938 in LaBroquerie, MB. Growing up on the family farm, Dad learned early on the value of a strong work ethic and sense of commitment and respect towards others. During those early years, Dad also developed a love for sports, in particular hockey and baseball. How ever, it was the outdoors that was his true passion, hunting and fishing or just being out in nature with his sons, this was his true Paradise!
Dad and Mom married in July of 1959, and shortly after moved to Saint-Boniface where he worked as a carpenter for 15 years at the Taché Nursing Centre. He was then transferred to Saint-Boniface General Hospital as Head Carpenter for another 25 years until his retirement in 2003.
Dad was a kind-hearted man, always modest, and ready to help anyone in need without expecting anything in return. Never did he judge or speak of others, or of himself. He taught us the value of honesty, respect, and hard work. For this we are forever grateful!
We would like to thank all the caregivers who have looked after our Dad over the years.
A private Celebration of Life will be held at a later date. In lieu of flowers donations may be made to CancerCare Manitoba, or to a charity of your choice in memory of Gerard.

Family and friends may sign a
book of condolence online at
www.desjardinsfuneralchapel.ca.