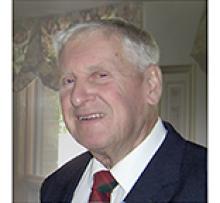 With saddened hearts, we announce the sudden death of our beloved father, grandfather, and great grandfather, on November 22. We are thankful for all that he meant to us and that his was a life well lived.
Dad was predeceased by his first wife, our mother, Barb in 1968, and by his second wife, our stepmother, Amy in 2011; and by his sister Florence and brother Gordon.
Left to mourn him are sons, Keith (Fran), Bruce, and Jamie; his beloved six grandchildren and seven great-grand-children. He is also survived by his brother Richard (Mary); Barb's brothers, Bill and Curt (Barb), and Amy's sister Fran (Wes) and brother Stan (Barb).
Dad was cared for over the past few years by the compassionate staff of Faith Lane at River East Personal Care Home, where their genuine fondness for him was heartwarming and much appreciated.
Prior to retiring in 1989, Dad was the Employment Supervisor and Personnel Director for the Central Division of CP Rail. Once retired, he and Amy enjoyed many winter vacations in Hawaii and Australia and extended visits with family in New Zealand and Scotland.
One of his favourite spots was Victoria Beach where he designed and built the family cottage in 1962, giving us all a legacy of many happy summers with friends and family.
Dad had a keen sense of community and history. He was a proud Elmwood-East Kildonan boy, but he could tell endless facts and stories of the people and history of most parts of Winnipeg.
He had a "tongue in cheek" sense of humour and a warmth of personality that easily endeared him to people. He gave a loving nickname to almost everyone he knew, letting them know they were special to him. A very sociable man, he enjoyed the comradery of others particularly over happy hours, whether at the cottage, Harbourside, or wherever he was vacationing.
Dad was grateful for all he had and summed it up in a response he made years ago to a birthday toast in his honour, "I've never been very rich in terms of money, but my whole life has been richly blessed with the love of my family and good friends. What more could I ask for?"
A memorial service will be held at Immanuel United Church, 755 Golspie St. at 1:00 p.m., December 15. All attendees must have proof of vaccination and be masked as per public health regulations.
Flowers gratefully declined. If friends so wish, donations in Bill's memory may be made to Immanuel United Church, 755 Golspie St., The St. Boniface Hospital Foundation, C1026 409 Tache Ave., or the Elmwood Kildonan YMCA, 454 Kimberly Ave., each of which had special significance for him.