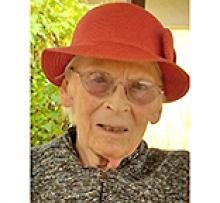 With sadness, love, and gratitude, the family of Hella Bueddefeld, mother, grandmother and great-grandmother announce her passing on December 4, 2021 at Bethania Personal Care Home following a brief illness.
She was predeceased in 2009 by her husband Karl. Left to remember her love are her daughter Karin (Richard) and their children: Melissa (Nick) with sons, Omel, Nico, and Gaston; Martin (Lindsay) with son Caleb; and David (Laura) with daughter Josephine; and her son Dieter (Deb) and their children: Nathan; Derek (Jill) with daughter Annika.
Hella was born in Rosenthal, Ukraine in 1923. She often recounted happy times from her childhood, of swimming in the nearby Dnieper River with her siblings and friends. Already early in her teens, however, she began to suffer under the measures of the communist regime in Ukraine, with first her father and then her oldest brother being taken from the family, never to return. As the oldest remaining child, Hella had to quit school and work as a bookkeeper at a local factory, in order to help support the family. In 1942 she was forced to flee with her mother, sister, and brother to Germany, where the family ultimately found refuge in the small town of Vasbeck. Here she met Karl, who would become her husband of 57 years, and in 1956 the two, along with their daughter Karin, immigrated to Canada, settling in Winnipeg where they lived the rest of their lives.
Hella worked for several years outside the home, first as a seamstress and then at Eaton's mail order. She enjoyed meeting and working together with people there, but her most comfortable role was that of homemaker, mother, and grandmother. She loved planting and maintaining her flower and vegetable gardens and was kept busy with canning the produce each fall. Her baking, particularly her Christmas baking, has provided good memories for many and her home-baked bread was a staple for her children and their families for years.
Mom cherished her relationships with her family and a group of close friends, many of whom she had known since childhood, and she enjoyed socializing with them regularly. Her faith, which had sustained her through many traumatic experiences in her younger years, remained steadfast and church life was important to her. Hella always had a special love for children, evidenced first with her own, then with her grandchildren, and in her later years, when the advance of dementia had limited her ability to communicate, nothing would light up her countenance and engage her more than a visit from her great-grandsons!
We remember Hella as a gentle, loving soul, with never a harsh word for anyone. She will be missed, but the memory of her will continue to bless us.
The family is very grateful to the staff at Bethania Personal Care Home, who provided such loving care in her last years.
There will be a private commemorative service for family only.
In lieu of flowers, donations can be made to Bethania Personal Care Home.