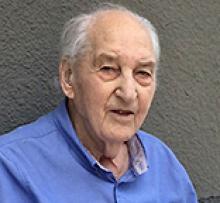 Our beloved father passed from this home to his new home in paradise.
He is predeceased by his wife Elvira (Regehr), his brother Menno Isaac, his daughter-in-law Diana Jones, and his great-grandson Noah Aron Hamm. He leaves behind his brothers, Abe, Walter (Betty) and Henry (Vera); and his sister Eleanor Theissen (Ed). He also leaves behind his children, Marv (Linda), Arlene Neufeld (Weldon), Sandi Hamm (Rick), Joyce Poetker (Ryan), Lawrence (Donna), 14 grandchildren and 12 great-grandchildren.
In 1924, dad was just one when his family settled in Arnaud, Manitoba, where he grew up farming. After declaring his faith-based conscientious objection to serving in the Second World War, he alternately served in a lumber camp and as a farm manager. In 1949 he married Elvira, the love of his life, after her smile "burned a hole" in his heart at a church choir practice. As our family grew, so did Arnaud Motors, their auto-mechanic and farm supply business. After the sale of the business in Arnaud, life brought our family to Winnipeg in 1979 where dad quickly found work at Palliser Furniture.
Bitten by the woodworking bug, dad took to his workshop in his spare time and later into retirement, where he hand crafted all manner of treasures. This was overshadowed by his devotion to his grandchildren and great-grandchildren. His patience was unmatched as he played endless hours of Snakes and Ladders, Dominoes and Nintendo at their request. His heart, however, belonged to his beloved Elvira. And his faith.
In every aspect of his life, dad lived with deep faith and conviction. He adhered to high standards of honesty, kindness and compassion. His commitment to service led him to volunteer his time to the MCC Thrift Shop and to the building crew and as bus driver for Camp Arnes. All his life he devoted his talents and his time to the Arnaud and River East Mennonite Brethren Churches and later, the Eastview Community Church. His love of music and singing expressed his faith, nourished his soul and blessed those who listened. He sang in church choirs, ensembles and quartets as an important part of his ministry. It was at Donwood where he was often heard singing hymns in the corridors and the dining room and later in his hospital room. It was this voice, his practical optimism, humorous outlook and inherent decency that warmed everyone who knew him.

We love you dearly and
will miss you always.

Our heartfelt thanks to the staff and residents at Donwood EPH who enriched dad's life so much. He loved calling Donwood his home. To the nurses, health care aides and staff (3rd Floor East) at Concordia Hospital, thank you for taking excellent care of our wonderful father.
Our thanks also go to Friends Funeral Service for arranging a private family service and interment.
Donations in dad's memory may be made to MCC and Donwood Manor.