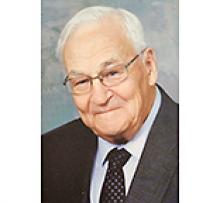 Art Borkowsky passed away on Thursday, December 23, 2021, at the age of 88.
He is survived by children, Roxanne Reimer, Kelvin, and Jennifer (Dale) Clark and five grandchildren, Zoe, Kayla (Will), Connor, Ben, and Ian.
He is predeceased by his wife Lena, parents Gottlieb and Christine (Grienke) and grandson Nikolas.
Art was born on January 25, 1933 on his family farm in Friedensfeld. He helped his parents on the farm and worked at Steel Briggs in Winnipeg. Art married Lena Schnellert on June 17, 1961 and they built a house and started to farm across the road from his parent's farm while he worked in Winnipeg. He and his father were progressive farmers at the time, being the first to purchase a self-propelled combine in the area which they also used for custom combining. On October 1, 1965, they took over his parent's farmyard and moved their dairy cattle across the road. Dad was most at home on the farm working the land.
Art enjoyed wood carving, puzzles and in later years watching TV, taking Sunday drives in the country, playing cards, chatting with people and visiting the senior's centre. Art instilled in his children a strong work ethic and by example taught us resilience and self-sufficiency.
The come and go viewing will be on Sunday, January 2, 2022, from 1:30 to 4:00 p.m. at Birchwood Funeral Chapel, Steinbach, MB., with a private family graveside service held on January 3, 2022.
In lieu of flowers, if friends so desire, donations in memory of Art may be made to St. Paul's Evangelical Lutheran Church Memorial Fund, 465 Henry St., Steinbach, MB R5G 1A1.