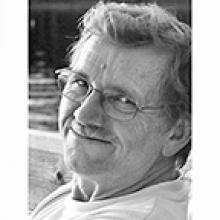 
Lovingly held by his family, John Albert Harder died on Friday, January 7, 2022 at the age of 86.
His spirit and memory will be cherished by his wife of 61 years, Carrie (Brubaker); children, Jorene (David), Ron (Melanie), and daughter to our family Leatha (Richard, Addae and Phletha). He will be dearly missed by his grandsons, Zachary, Daniel, Joshua, Jordan, Andrew; and stepgrandson Ben.
John, the son of Abram A. Harder and Maria (Braun) Harder, was born in Vineland, Ontario on November 25, 1935. At 22 months of age, after the loss of his mother, he went to live with his paternal grandparents, Abram and Anna Harder and his aunt Sarah. Later, when his Dad remarried Catherine (Fransen), John came home to live with his family which included two older brothers, Waldo (Frieda) and Helmut (Irma). Later his sister Marianne (Edward) and another brother Ronald (Eleanor) were born and the family was complete.
John grew up on a beautiful, vibrant fruit farm and the family worked together, tending every aspect of the season's work. He left the farm at age 18 to become a teacher. His first assignment was in a one room schoolhouse with eight grades. John went on to pursue post-secondary education at Goshen College and the Associated Mennonite Biblical Seminary. He then served as pastor at the Thompson United Mennonite Church in Thompson, Manitoba. Later he graduated from Ohio State University with a Masters degree in American Literature. In the 1970s his family lived on a farm near Elora, Ontario where he thoroughly enjoyed working the land and also doing sessional work at the University of Guelph.
Perhaps the most fulfilling time of his career was teaching English Literature and directing the drama program at Rockway Mennonite Collegiate in Kitchener, Ontario. He had a passion for language and enthusiasm for teaching which fed his soul. It was his ardent wish to use his gifts and experience to reach the students with a varied and engaging curriculum. During this time John and Carrie were active members of the Stirling Avenue Mennonite Church which provided another community for friendship and service.
In his retirement years, John taught several sessions at the Hong Kong International School and served with Carrie on various volunteer assignments. He wrote a book entitled From Kleefeld With Love which chronicles the plight of his ancestors who were unable to leave Ukraine and reunite with the Harder family in Canada. In 2006, John and Carrie moved from Kitchener to Winnipeg to be with their children and grandsons. It is here that they became members at the Fort Garry Mennonite Fellowship.
The family would like to thank all those who provided support and friendship to John over the past three and one-half years.
Special thanks to the Riverview Health Centre team on C1 since 2019. Your grace, compassion and competent care fostered a sense of community during tough times; a gift to us all.
This obituary can also be viewed at www.friendsfs.ca where details about the memorial service will be provided.
If you so wish, donations may be made in his honour to Mennonite Central Committee.