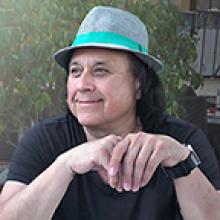 
It is with profound sadness we announce the sudden passing of Vince Fontaine on Tuesday, January 11, 2022. Vince would like us to say he was 59 (but he was 62).
A proud member of Sagkeeng Anishinaabe First Nation, Vince was born in Winnipeg, Manitoba, a city and community he loved and nurtured.
Alongside his brother and sisters, Vince grew up in Elmwood hanging out with his best cousins, Alvin and Lionel, connections that remain strong to this day.
Vince's passion for music began at a young age when his sister, Shirley, gave him his first guitar that he took to naturally and proficiently.
Vince was a much beloved musician, producer, festival curator, and mentor. Vince has been celebrated many times over for his creative direction of multi-award winning band, Eagle & Hawk, and his talented collective, Indian City. Vince's career was abound with awards and recognition, and he remains one of Canada's most important Indigenous composers.
Vince's true passion and legacy lies in his ability to build bridges between people from all walks of life through his music and craft. Vince believed in, and was committed to, Reconciliation.
On any given day, Vince could often be found at the downtown YMCA playing racket ball with his longtime buddies; having tea in the backyard of Frank and Collette's; visiting his beloved mother, Nora; eating cinnamon buns with his cousin Phil; in the studio with his friend Chris; rehearsing and playing with his musical family; or checking in on friends and family throughout the day.
Vince's love for music was only outshone by his love and devotion to his family, friends, and community. He was so proud of his family, and in particular, his children, whom he often called his "genius kids." Vince was the connecting nucleus for the Fontaine family and played a fatherly role in the lives of his nieces and nephews.
Vince was predeceased by his father Henry (Manish); his sisters, Sharon, Shirley, and MaryCarole; and nephew Chauncey.
Vince will be incredibly missed and his memory held dearly by his mother Nora (Nan); his wife and partner of 36 years, Dodi; his children, Aleah, Gabrielle, Joe, and Lacey (Raine, Rylan, Presley, Noah, Lachlan, and Oaklen); his brother, Larry; his nieces and nephews, Nahanni (Jonah and Niniichaanis), Tonya (Dylan and Ashten), Talia, Shauna (Ethan, Davin, and Lyla), Naomi, Robert, Justin, Zeb, Zal, and Zoe; his siblings-in-law, Steve and Nancy, Faith and Randall, and all of the Bell family.
A Celebration of Life will take place on Sunday, January 16, 2022, at the Oodena Celebration Circle at the Forks from 1:00 p.m. to 3:00 p.m. All are welcome.
In lieu of flowers, donations may be made to the Bear Clan Patrol and/or Broadway Neighbourhood Centre.