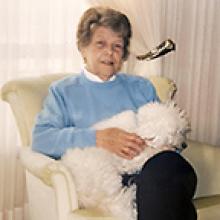 
Born in a farmhouse near Lowe Farm, Manitoba in 1934, Anne (Rempel) grew up in a large family. When she was six, they moved to another farm near Plumas, MB where she attended a one-room country school.
Anne is survived by Jim, her husband of 64 years whom she met in Lac du Bonnet, MB and married in Winnipeg; her children, Todd (Jayne) and Donna; grandchildren, Nicholas and Madeleine; siblings, Jackie, Kathy, Mary, John, Dave, and Abe; and countless nieces and nephews. She was predeceased by her parents, Sarah and Jacob; siblings, Tina, Nettie, Lena, Susie, Bill, and Eddie; and her son-in-law Kevin Tell.
Anne's first language was Plattdeutsch that grew into English and served her ambition of leaving home to ultimately work in banking - first in Steinbach, then in Lac du Bonnet, Winnipeg, Calgary, and Regina. She brought her banking life to the kitchen table almost every night, and as kids it was fascinating to hear her describe surviving a number of bank hold-ups. Her talent working with numbers allowed her to thrive in the banking world, and apply her skill to home finances where she had a knack for investing. Combined with frugal spending and a solid work ethic, she, along with her husband were good providers for their family. Anne's financial finesse, in a large part, allowed her and Jim to be well-cared for in later years.
All along, Anne knew what she wanted, and was stubborn in achieving it. She was fun loving and some (all) would say a bit of a brat and formidable critic. Because of this (or despite it) she had many friends and made them easily. She was a rabid knitter, and toward the end of her life knit scarves and toques for anyone who was a friend. If you didn't get one, it's only because she ran out of steam. She was generous in so many ways, always thinking about things she could give to people. Her love language was cryptic and subtle, but once you caught on to her ways, you knew you were loved. This was less concealed with her grandchildren with whom love was shared openly and joyfully between them and 'momo'. Anne was a music lover - old time, bluegrass, and country music. Getting an iPad was a dream as she could peck out her favourite songs for hours - often the same one over and over again. This love of music was punctuated every Saturday night when household activities stopped and local TV played Saturday Night Dance Party as she vicariously danced with the old timers on the show. She was also passionate about curling, never missing a championship series on TV - sharing game details over the phone with her sister Lena. In her final years she could barely walk. But her stride dramatically improved when she was dropped off at a shopping mall with Cleo's at the other end.
Anne had a survivor's spirit, which served her well as for nearly three decades she sailed through a list of medical conditions to which most people would have succumbed. She eventually endured great pain and in palliative care, rested more comfortably until the end of her life. During her final days, a small family gathering shared an abundance of stories, music, and love. We all said good-bye and she was ready to go. She passed away at the age of 87 during the early hours of January 16, 2022.
The family sincerely appreciates the comforting care Anne and her visitors received at the Palliative Care unit of the Pasqua Hospital in Regina. Anne was always grateful for the medical care provided by Dr. James Johnston, oncologist at CancerCare Manitoba. He successfully treated her multiple myeloma for 20 of past 27 years, giving her a long life.
A small service for the family commemorating Anne's life has been held. Family and friends are invited to view this obituary and the tributes page at www.reginafuneralhome.ca.