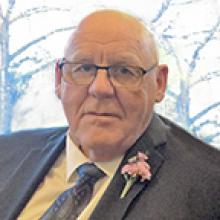 
Helmuth was born to Aganetha (nee Martens) and Jacob Klassen. He grew up on the family farm and participated in the Steinbach Mennonite Brethren Church where he got to know Agnes Goertzen. They married on July 2, 1964.
Helmuth and Agnes welcomed Joanne in 1966 and Richard in 1968. They supported their children in their efforts at sports, music and academics. They welcomed Richard's wife Eileen and eventually grandchildren, Julianna, Emma and Grace. Helmuth and Agnes loved being grandparents and invested much love and time in their grandchildren. Julianna's husband Taylor was cherished when he joined the family. Helmuth also welcomed Joanne's partner Wayne.
Helmuth worked as a teacher, principal, CEO of Donwood Manor and as a healthcare consultant. Church life was a vital part of life and Helmuth participated in various roles at River East Church over the years.
Life was not without hardships. The most difficult was Agnes' diagnosis with terminal cancer. They celebrated their 54th wedding anniversary before she died in September 2018. Helmuth grieved the loss of Agnes until his own death, however he also loved life and wanted to live fully. Recently health concerns increased for Helmuth. On February 10 he went to the hospital and died unexpectedly and peacefully on February 12, 2022 at St. Boniface Hospital.
Funeral service for the double vaccinated will take place at 10:30 a.m. on Friday, February 18, 2022 at River East Church, 755 McLeod Avenue, Winnipeg, with viewing prior. There will be viewing on Thursday, February 17, 2022 from 7:00 p.m. to 8:30 p.m. in groups of 50 at Friends Funeral Service, 2146 Main Street, Winnipeg. Interment at Sunnyside Cemetery.
If friends desire, donation may be made to River East Church Refugee Fund or Donwood Manor Foundation in Helmuth's memory.