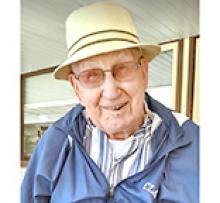 Peacefully at Cedarwood under the care of Rest Haven in Steinbach, Dad passed away at the age of 99 years, on Sunday, February 20, 2022.
John was born on September 27, 1922, in the Village of Neuhoffnung, MB, to Sara and Henry Wiebe. He was baptized upon the confession of his faith by the Bishop W.H. Falk in 1941 and married our mother Susan Toews on October 14, 1943.
John will lovingly be remembered by his daughter Irma and Henry Friesen, son Rick and his children: Guy and Roxane Dowhy, Gus and Tara Rory, Kiley and Maren Durksen, Jolene and Daryl Carisa, Isabel and Wyatt Wiebe; his brother Abe and Martha of Three Hills, AB and sister Anne and Henry Schellenberg of Regina, SK, along with his uncles John and Ben both of Altona, MB.
Dad was predeceased by his wife Susan, daughter-in-law Phyllis, grandson Dale, four brothers Henry, Jake, Peter and Cornie and sister Sara.
The livestreamed private family service will be held on Monday, February 28, 2022, at 11:00 a.m. at Birchwood Funeral Chapel, Steinbach, MB, with viewing prior to the service from 9:30 a.m. - 10:30 a.m. Interment will be held at Heritage Cemetery, Steinbach, MB.