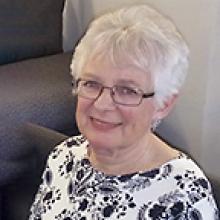 It is with great love and sadness that we announce Eileen has died at the HSC in Winnipeg, due to complications resulting from cancer. Eileen had been seriously ill and hospitalized since December 30, 2021. Fortunately, in her final days at the hospital, Eileen was accompanied constantly by family and friends.
Eileen was born in Greenridge, Manitoba. She grew up in Dominion City and returned to work at CIBC in Dominion City after college in Winnipeg. The main attraction for her return was less the job than a handsome farmer/dancer named Clayton Gunn who became her husband March 9, 1968. They farmed in Greenridge and continued to live on that property for almost 50 years before moving to Steinbach in July 2017. Together they spent more than 50 years doing what they loved - producing beautiful gardens, making wine from their own fruit and dancing, dancing, dancing throughout many of the towns and villages of southern Manitoba. They took and taught dance lessons and entertained at many Seniors Homes over many years.
Although Eileen and Clayton did not have children of their own, they provided a solid foundation for the entire "Schmidt" family. A beautiful, treed area on their property near the river became a centre for the entire family to camp, build cabins and spend weekends around a campfire together. Many of her nephews and nieces virtually grew up there and some continue to return to this base.
Eileen was predeceased by her husband Clayton (May 12, 2019); parents, Julius Schmidt (1998) and Olga (Bohn) Schmidt (2003); brother Leo (2005); sister Doreen (2014); brothers-in-law, Bob Stanke (2012), Bill Berg (2013).
She is survived by her sisters, Elsie Berg, Florence Stanke; brothers, Clarence (Jan), Ray (Maggie), Albert (Annie Marie); sister-in-law Jan L'Oiselle; brother-in-law John Wilson; sister-in-law Sheila Gunn; special friend Andrew Chrupalo and numerous nieces, nephews and great-nieces and great-nephews.
Eileen and Clayton were active participants in the communities in which they lived. Eileen was a devoted member of the Lutheran church in Friedensthal and St. Paul's in Steinbach. Their beautiful farm and gardens were a soothing haven for family and their many friends. But they expressed their love for life most through dancing. Just before Clayton died, he asked Eileen to "keep on dancing"; she did and we know they will continue to dance in the memories of family and friends.
A Celebration of Life will be announced and held at a later date.
In lieu of flowers, donations may be made to CancerCare Manitoba or the Greenridge Cemetery Association (Box 27, Woodmore, MB R0A 2M0).