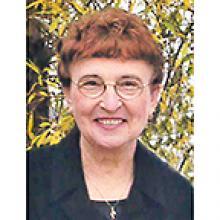 
Revelation 21:4
"He will wipe away every tear from their eyes, and death shall be no more, neither shall there be mourning, nor crying, nor pain anymore, for the former things have passed away"


We invite you to come and celebrate Norma's life with us. A public viewing will be held on Tuesday, April 5, 2022, from 7:00 p.m. to 9:00 p.m. with a devotional at 8:00 p.m. at Birchwood Funeral Chapel, 162 PTH 52W, Steinbach, MB.
A funeral service will be held on Wednesday, April 6, 2022, at 11:00 a.m. at St. Paul's Evangelical Lutheran Church, 465 Henry Street, Steinbach MB, with a viewing one hour prior to the service. Burial to follow at the St. Paul's Lutheran Church Cemetery.
A Celebration of Life reception for Norma and Seaton will follow the burial.
In lieu of flowers, the family requests that donations on Norma's behalf be made to St. Paul's Evangelical Lutheran Church Memorial Fund or Lutheran World Relief.