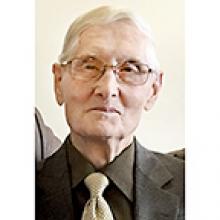 
Surrounded by his family, on April 27, 2022, after a brief illness, Victor Hamm of Winnipeg passed away at the age of 95 to go home to be with his Heavenly Father.
He will be greatly missed and leaves behind to mourn: his loving wife of 61 years, Connie, sons Bruce (Bernadette), Roger (Shaana), grandsons Brydan and Jarrett, his brother Jake and numerous extended family and close friends.
He was predeceased by parents, Martin and Maria Hamm; stepmother Lena Hamm; brothers, Martin, Henry, Cornie, Dave, John; and sisters, Lydia, Martha, Mary, Annie; and daughter-in-law Lisa.
Vic was born in Winnipeg on March 25, 1927, and raised on the family farm in Elie, Manitoba. This was where he learned the value of hard work and began his love affair with machines.
He attended Glengary School between 1934 and 1941 and later Winkler Bible School in 1945 and 1946. Vic started his working life on the farm as a "hired man" and transitioned to construction work for several years. After getting married Vic worked in sales for Bearing Supply Canada Ltd. where he retired as Sales Manager in 1988.
Vic met Connie Enns in 1959 and they were married in 1960 at the Central MB Church. In 1963 they welcomed their first son, Bruce and their second son Roger in 1968. As a family, many weekends were spent camping and fishing. Family vacations were road trips across Canada which included visiting friends and family along the way. One memorable trip took the whole family in a small red Austin Mini all the way from Winnipeg to Florida!
In their retirement years, Vic and Connie enjoyed many winters in Texas in their motorhome, as well as special trips to Hawaii and Alaska. Vic also loved doting on his two grandsons, Brydan and Jarrett.
Vehicles were always a source of pride for Vic. Every car he bought, owned, repaired, and sold had to be in pristine condition and was always driven like a true "Hamm" with careful, controlled speed! Vic's love of driving kept him on the road well into his 90s.
Since he was a young man, Vic had a personal relationship with Jesus Christ. His whole life revolved around his faith, and he served his Lord in many ways. Vic and Connie were founding members of Brooklands MB Church, and Vic has served as deacon, elder, Sunday School teacher, treasurer, as well as many other unofficial roles that showed his true faith. When he passed Vic was still a current member of the Westwood Community Church. Another important organization that Vic was passionate about was Gideons International. If you have stayed in a hotel in Winnipeg, Vic likely placed Bibles in one of them! He also helped the Gideons place New Testaments in Winnipeg schools for many years.
Vic spent the last five years with Connie at the Lindenwoods Manor where he enjoyed his twilight years relaxing and enjoying the simple pleasures of reading, walking, wood carving, and coffee with friends.
Thank you to the staff of Concordia Hospital for their care and kindness while he was in the hospital this past month.
In lieu of flowers, donations may be made to The Gideons International: https://gideons.org/donate.
Funeral service will be held Saturday, May 21, 2022 at 11:00 a.m. at Westwood Community Church, 401 Westwood Drive.