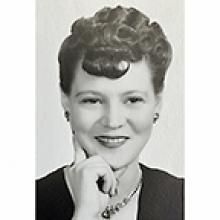 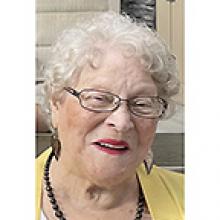 
It is with deep sadness that we announce the peaceful passing of Marie Berthe Regina Clemence (better known as "Betsy") Mourant (nee Desautels) in Ste. Anne Manitoba on May 9, 2022 at the age of 89.
Betsy is survived and will be lovingly missed by her son Gilbert (Agnes), her daughter Marilyn (Marc), Sonia Cummings (Gary's partner), her grandchildren, Dylan (Bridgette), Jennifer (Kyle), Melanie, Angele (Michael), Karis (Keenan), Falon (James), her great-grandchildren, Seth and Sadie, Caydance and Arianna, Hudson and Rhemi, and Atlas.
Betsy will also be lovingly remembered by her foster brother Ken (Cecilia) Malo, brother-in-law Jules (Lucille) Mourant, sisters-in-law Isobel Mourant and Lenore Mayer, and her many nieces and nephews.
She was predeceased by her loving husband of 66 years, Paul Hudson Mourant (2019), her son Gary Mourant (2022) and great-grandchild Aiden Mourant (2007). Also, she was predeceased by her parents Ubald and Marie Desautels, her brother Roland and Annie Desautels, her sister Lucienne and Johnny Trudeau and her foster brother, Emile Scott.
Betsy was born April 22, 1933 and raised on her parents' farm just west of Ste. Anne, Manitoba. In her formal years of high school, she resided and attended the Grey Nuns (Soeur Grises) Convent and Academy at Sainte Anne des Chenes. Once her loneliness grew unbearable for Papa and Maman and she was tired of eating pumpkin, she'd sneak back to her parents' farm 4 km away. After a short visit, Papa would hook up the horses and wagon or sleigh and return her to the convent till the next time.
After graduation, Betsy spent a short stint as a telephone switchboard operator in Ste. Anne. Thereafter, she moved in with her sister in St. Boniface and was tempted to go into modelling after receiving an offer from a modelling agency for which she had posed for what she claimed to be her prettiest and proudest photo. But she found her calling in banking and worked as a teller for a couple of years at the Canadian National Bank. Then she met and married the love of her life, Paul, on October 24, 1953. In 1955, she gave birth to her first child and from then on lived in Dufresne, Manitoba. Mom took a pause from banking, raising her three children while also owning and operating the Dufresne General Store and Post Office for a number of years. Later on in 1966, mom and dad moved into their new home near the Mourant Bros dairy farm and spent many enjoyable years there. Once all of the children were off to school, Betsy resumed her career in banking working 22 years at the Caisse Populaire in Ste. Anne until her retirement. All the while surviving an armed robbery and enduring the disastrous fire at the Caisse. In 1985, Mom and Dad moved to Ste. Anne at 2 Desrosiers Place and later were awarded the Village of Ste. Anne most beautiful yard. In 2001, they moved to the Villa Youville. Mom and dad also enjoyed many years of fun at their camping spot at Green Bay Resort, Caddy Lake, Manitoba.
Mom was a loving, compassionate and very supportive person, standing by dad's side despite all his health misfortunes. It gave her immense pleasure to be with and play with all her children, grandchildren and great-grandchildren. Mom was especially proud when all three of her children were Valedictorians at their high school graduation. Betsy beamed with positivity and brightened any room she walked into. Betsy was the life of the party. Mom was a strong and proud person, always dressed smart, with prim and proper outfits, matching scarves and plenty of lipstick, and deservingly so, as mom and dad worked very hard to achieve their accomplishments.
Although Betsy had no formal training as an actress she sure could put on a show. Whether it was to entertain, playing the piano, singing songs by Fats Domino, the Andrew sisters and her favourite "You are my sunshine" or dancing. And once in a while being mischievous (oh yes Betsy could be naughty) to slightly sway you to get her way. A famous cheer she liked repeating while raising a glass of baby rye was "When I want it, I want it awful bad, And when I don't get it, it makes me very mad, And when I do get it, it makes me feel so frisky, now don't get me wrong, I mean a shot of whiskey!"
Mom was granted her wish on May 9, 2022, released from her tired body and joined Dad, Gary, Papa and Maman, and the rest of her family in heaven.
A Celebration of Life will be held on Tuesday, May 17, 2022 at 2:00 pm at Birchwood Funeral Chapel, 162 PTH 52W Steinbach, Manitoba with ash internment to follow at a later date.
The family would like to thank all those who provided care and compassion for Berthe, in particular, Soeur Rioux, the staff at Villa Youville and the Ste. Anne Hospital, and especially her card playing friends at the Pavillon.