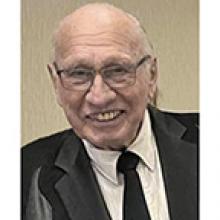 PETER F. WIENS July 20, 1932 - April 20, 2022 Peter F. Wiens, aged 89, of Grunthal, MB., passed away at his home on Wednesday, April 20, 2022. He is survived by his son Raymond and two daughters, Sharon (EJ) Wiens-Hiebert and Luella (Frank) Fehr. Peter felt so blessed by each of his grandchildren. He was grandpa to Jesse (Beth) Wiens, Dallas (Colleen) Wiens, Dustin (Jenna) Wiens, Colten (Danielle) Fehr, Dextyn Fehr and Bryce Cook. Peter was called great-grandpa by Janessa Wiens, Callum, Elliot and Sierra Fehr, as well as Anabell, Zade and Taizo Friesen. Peter will also be fondly remembered by his sister Sally Wiebe, brothers Cornie (Martha) Sawatzky and Ben (Sara) Sawatzky as well as sisters-in-law Helen Maguire, Sarah Friesen, and Eva Funk. Peter was predeceased by his wife Anne, and their infant son Stanley. He was also predeceased by his father John Wiens, his mother and stepfather, Anna and John Sawatzky, along with his two brothers John and Henry Sawatzky, and multiple in-laws. Peter was married to Anne for 67 years, and together they had four children. In the early years, he worked as a pulp cutter in a sawmill. He was employed for a time at Manitoba Sugar as well as in road construction. While in Prince George, he worked as a heavy equipment operator. Peter came back to Steinbach where he enrolled at Steinbach Bible College and graduated in 1962. Later he went to minister with the Shantymen Organization. He was with this mission for 18 years. From there, he joined the Union Gospel Crusaders and ministered with them for another 20 years. He did many devotional services and mission work. During this time, Peter also worked hard at his plumbing business called Wiens Backhoe Service and built up his registered Wiens Herford herd. In his lifetime, he enjoyed renovating residential properties, farming land, traveling, fishing and camping. Our Dad enjoyed life! He was cheerful, a hard worker and loved his family. Most of all, he loved spending time with his best friend, our mom. He missed her so much. He had a firm faith and relationship with his personal friend and Saviour, Jesus Christ. A Celebration of Life service will be held at Birchwood Funeral Chapel, Steinbach, MB at a later date. As a family, we would like to thank all the friends and neighbours who visited our dad. We would like to extend a special thanks to Pansy Chapel for all they did for our parents. We appreciate all the condolences, flowers and cards. A thank you to Dr. Paige, Dr. Orliko and Dr. Marzban for the care and dignity that they showed our dad.